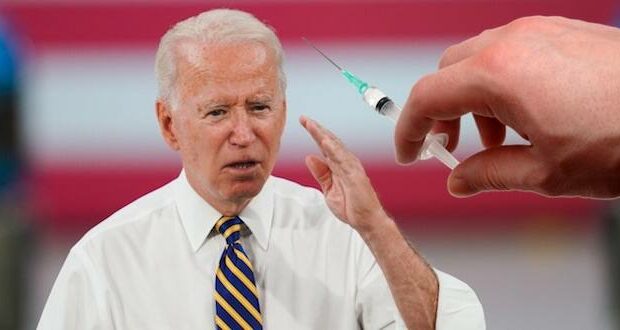 In a speech today, President Joe Biden could announce federal efforts to force vaccinations on Americans. White House press secretary Jen Psaki on Wednesday asserted that new restrictions and a mandate could be imposed on unvaccinated people.

In a statement that has civil liberty advocates concerned, Psaki responded to questions about how American’s lives would be impacted by saying “it depends on if you’re vaccinated or not.”

Her comments contradict her statement on Tuesday that the federal government does not have the constitutional authority to mandate vaccines for all Americans.

“There will be new components that sure, will of course impact people across the country, but we’re also all working together to get the virus under control, to return to our normal lives,” Psaki also said, without elaborating, on Wednesday.

The Biden administration has missed every benchmark it had set since inauguration day. The goal of having 70% of Americans vaccinated by July 1 came and went, so did August 1 and now September 1 with the goal still eluding the administration.

Close to 142 million Americans have received COVID-19 vaccines and about 950,000 people are getting vaccinated each day, according to data provided by the Centers for Disease Control and Prevention (CDC). The vaccine’s effectiveness is now being questioned in many medical arenas because of “breakthrough cases,” – or fully vaccinated individuals contracting the virus and suffering serious consequences, even death.

As schools districts impose controversial mask mandates on students, the CDC released data that the latest outbreak has leveled off.  The CDC’s COVID-19 tracker suggests that the United States’ new cases and deaths may have hit a plateau or is on the decline. The seven day-average for cases as of Tuesday was 140,000 and deaths were 1,022, respectively, while as of Sept. 1, the seven-day average for cases was 156,000 and deaths were 1,141, respectively.

The administration is now pushing a booster shot. Israel, which is several months ahead of the U.S. in testing has announced that the vaccine may be so innefective that a fourth shot may be needed with boosters every 6 months. The news has fueled those who question the process in which the Pfizer vaccine was tested, released and how its efficacy is performing.