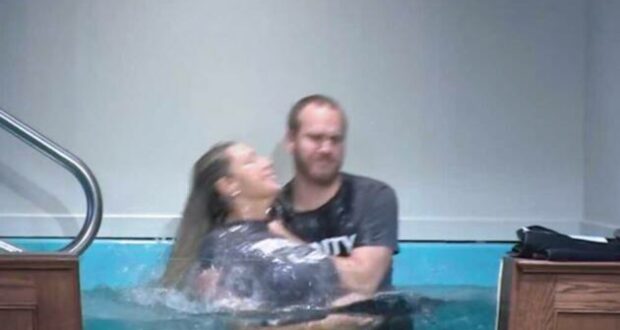 Canadian Jennifer Scott says she'd be dead if a Canadian church had not defied a government ban on meetings.

Trinity Bible Chapel in Ontario, Canada, was fined $100,000 last year for refusing to shut its doors in defiance of the Reopening Ontario Act, as well as the Emergency Management and Civil Protection Act. Defying the ban, however, made an eternal difference for at least one person dying slowly from drug abuse.

In a viral video, a Christian convert and former drug user said that she would be dead if her church had remained closed because of COVID-19. Jennifer Scott testified before her baptism that personal interactions with other believers led to her salvation.

“Before Christ, I was a very angry person and filled with fear, doubt and self-pity,” she said. “I was constantly seeking avenues of filling the hole in me that only Jesus could fill. It began with marijuana and ended with smoking crack cocaine and intravenous drug use. I was a slave to darkness.”

Scott testified that “Jesus never stopped his pursuit of me” despite various backslidings into drug use. It was an in-person prayer meeting at Trinity Bible Chapel that began the end of substance abuse in her life.

“Most recently, I was smoking and shooting seven grams of cocaine a day, and my son asked me to come to a prayer meeting at Trinity,” she said. “In my small group, I asked for prayer to help me stop. I left a comment on one of Pastor Jacob’s sermons on YouTube. Pastor Jacob took the time to find out who I was, tracked me down and called me to pray for me and to encourage me to keep coming to church.

"None of these things would have happened if Trinity closed it's doors and was solely online…I'd be dead right now if God had not used this church in my life."

There are people like Jennifer in your community. Refuse to turn them away.#OpenYourChurch pic.twitter.com/OEzFVIW5bM

“I have been clean and sober now for over seven months, moved into my own apartment, and the body of Christ here at Trinity has helped me with furniture and other blessings. None of these things would have happened if Trinity closed its doors and was solely online. I know for a fact that I’d be dead right now if God had not used this church in my life.”

As Scott’s video spread on Twitter, shared alongside the hashtag “#OpenYourChurch” by Trinity Bible Chapel,  pastors and commentators began reacting. “In these discouraging times in Canada, this wonderful testimony about God’s grace placed a massive smile on my face,” Slow To Write blogger Samuel Sey said. “Praise the Lord.”