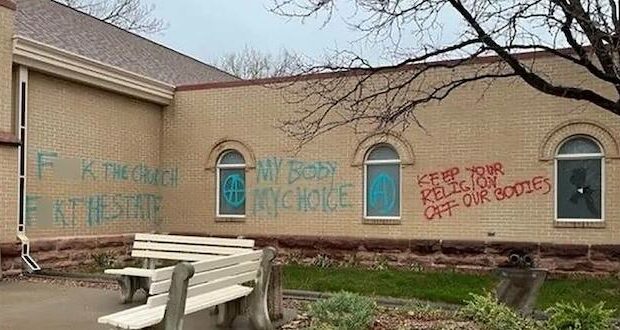 A major religious liberty organization will sue pro-abortion protesters who are invading and defacing churches across the nation.  The announcement comes after hundreds of protesters harassed churches to protest a possible Supreme Court ruling which could overturn Roe vs. Wade. Churches from Denver to New York were attacked over the weekend.

The Thomas More Society made its intentions known in a May 6 letter (pdf) directed to a shadowy group calling itself Ruth Sent Us, which has been targeting churches and Supreme Court justices’ homes.

The letter notes that since “the police brutality protests” of mid-2020, the U.S. Conference of Catholic Bishops has identified “129 incidents of vandalism, arson, and other hate crimes directed at Catholics.” That’s in addition to hundreds of incidents against protestant, and other churches across the country. 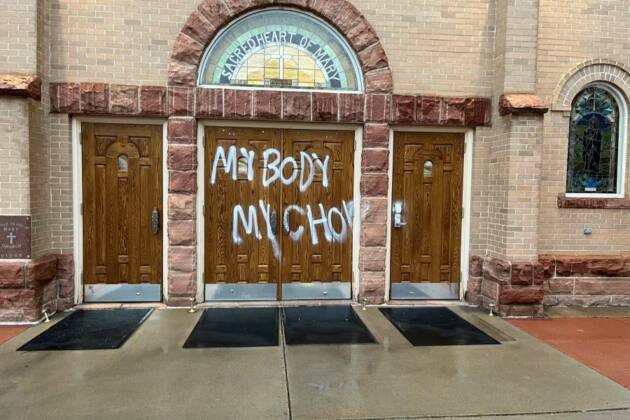 A Boulder church was one of dozens attacked over the weekend.

Ruth Sent Us claims to be inspired by the late liberal Supreme Court Justice Ruth Bader Ginsburg, who died on Sept. 18, 2020, and was succeeded on the court by conservative and Catholic Justice Amy Coney Barrett. Ginsburg “spent her entire life moving the needle toward justice for all,” the group says on its website. However, Ginsburg, like the statements in the leaked court document, herself said that Roe was a poorly written and adjudicated ruling.

“Our 6-3 extremist Supreme Court routinely issues rulings that hurt women, racial minorities, LGBTQ+ and immigrant rights. We must rise up to force accountability using a diversity of tactics,” the website states.

Ruth Sent Us is also offering to pay for “artwork”. Images over the weekend showed dozens of churches painted with the symbol for the Marxist group Antifa, and profane language attacking Christians.

“Are you a muralist or chalk artist? Are you a graphic designer who would like to contribute remotely? Large-scale art will be included in the protests against the Supreme Court. Stipends available,” the site states.

The draft opinion in Dobbs v. Jackson Women’s Health Organization would uphold Mississippi’s Gestational Age Act, which allows abortions after 15 weeks’ gestation only for medical emergencies or severe fetal abnormality. The document has been welcomed by conservatives and constitutionalists but has become a lightning rod for the left. Well-funded abortion lobbies have mobilized protesters around the Supreme Court building, which increased its security to deal with potential threats. There have been protests nationwide, including at houses of worship on Mother’s Day and at the homes of Supreme Court justices.

The White House has refused to condemn both the unprecedented leak of the high court’s work product and the targeting by demonstrators of justices at their homes.

The letter from Thomas More Society President Thomas Brejcha, and two of its special counsels, Charles LiMandri and Paul Jonna, states that on Feb. 28, Ruth Sent Us “chose to trespass at and disrupt a Catholic Mass being held in the Cathedral of St. Mary of the Assumption in San Francisco,” and “recorded the abusive event and then promoted it on various social media platforms.”

“Then, on May 3, you re-posted a portion of the same video, and explained, ‘Whether you’re a ‘Catholic for Choice’, ex-Catholic, of other or no faith, recognize that six extremist Catholics set out to overturn Roe. Stand at or in a local Catholic Church Sun May 8.’ In a separate tweet on the same day, you wrote, “We’re calling for interrupting mass or picketing churches nationwide on Mother’s Day.’

“Finally, on May 4, you again tweeted the video and explained, ‘We protest at churches, to make sure people understand why Roe is falling—extremist Christians plotted it, and all extremist church-goers are complicit.’”

Over the weekend, chanting demonstrators protested outside the homes of Chief Justice John Roberts and Justice Brett Kavanaugh.

The left-wing group ShutDownDC plans a protest outside of opinion author Justice Samuel Alito’s home on the evening of May 9. The group’s website described the event as “a vigil for all these rights that Alito is threatening to take away.”

Previous: Faith Christian Academy Graduating Seniors 2022
Next: Getting The Taxman Out Of Your Retirement — Part 2