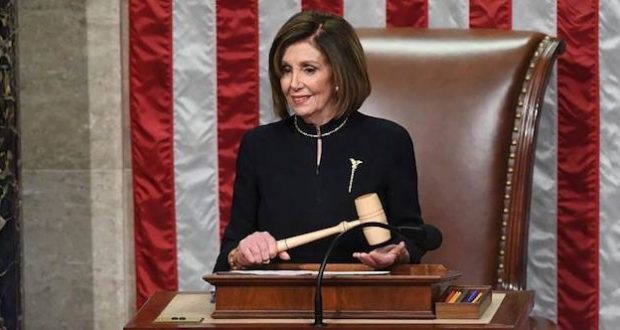 In the first totally partisan impeachment vote in history, Democrats in the House of Representatives voted on Dec. 18 to impeach President Donald Trump. All of the Republicans voted against the resolution, marking the impeachment as the most partisan in U.S. history.

Democrats, who had been told to wear black for the vote and not clap, began clapping as House Speaker Nancy Pelosi announced the tally. As Democrats began to clap, Pelosi raised a hand and sternly hushed the Democrat members into silence but not without refraining a slight grin herself.

Breaking with their party, two Democrats — Rep. Jeff Van Drew (D-N.J.) and Rep. Collin Peterson (D-Minn.) — broke ranks with their party to vote no on the first article of impeachment. Rep. Justin Amash, an independent from Michigan who left the Republican Party earlier this year, voted with the Democrats. Rep. Jared Golden (D-Maine) joined Van Drew and Peterson in voting no on the second article of impeachment. Rep. Tulsi Gabbard (D-Hawaii) voted “present” on both articles.

The impeachment resolution alleges that Trump abused the power of his office by pressuring Ukraine to investigate a political rival, and that the president obstructed justice when Democrats began to investigate the matter. Many law experts say the Democrats did not provide evidence to prove the allegations and their only witnesses had second and third-hand connections. Republicans were not allowed to call more than one witness and Democrats asked no questions of that witness.

Republicans say impeachment is a partisan effort to overturn the results of the 2016 presidential election. Democrats say their support of the resolution stems from a constitutional duty.

Trump has slammed the process as a hoax and  polls released the day after impeachment show him polling ahead of all Democrat candidates in the 2020 election.

“SUCH ATROCIOUS LIES BY THE RADICAL LEFT, DO NOTHING DEMOCRATS,” Trump wrote on Twitter hours before the vote. “THIS IS AN ASSAULT ON AMERICA, AND AN ASSAULT ON THE REPUBLICAN PARTY!!!!”

In speeches during the debate that preceded the vote, Republicans defended the president and accused Democrats of seeking to use an unfair, rigged process to ram the impeachment through the House of Representatives. Democrats on the House Judiciary Committee approved the articles of impeachment based solely on hearsay evidence and the presumptions and opinions of witnesses.

“The matter before the House today is based solely on a fundamental hatred of our president,” Rep. Mike Rogers (R-Mich.) said. “It’s a sham, a witch hunt — and it’s tantamount to a coup against the duly elected president of the United States.”

House Democrats argued that Trump’s alleged wrongdoing has left them with little choice but to move forward with impeachment.

“If we do not act now, we would be derelict in our duty,” House Speaker Nancy Pelosi (D-Calif.) said. “It is tragic that the president’s reckless actions make impeachment necessary.

House Democrats probed the events surrounding the July 25 call between President Donald Trump and Ukrainian President Volodymyr Zelensky, during which Trump asked the Ukrainian leader to “look into” the firing of Ukrainian Prosecutor General Viktor Shokin. Weeks before his ouster, Shokin seized the property of the owner of a Ukrainian gas firm which, at the time, paid Joe Biden’s son Hunter tens of thousands of dollars a month to sit on its board of directors.

Biden has bragged about forcing Shokin’s ouster by threatening to withhold from Ukraine $1 billion in loans.

Having cleared the House, the Democrats’ impeachment articles will be sent to the Senate, which will hold a trial in 2020. A supermajority vote by two-thirds of the Senate (67 votes) is then required to convict and remove the president. Republicans hold a majority in the Senate and have shown no interest in removing Trump, who wields a 95 percent approval rating among Republican voters.

Trump is only the third president in U.S. history to have been impeached; Bill Clinton and Andrew Johnson were impeached, but neither was removed from office. Johnson was acquitted by one vote.

Vice President Mike Pence, speaking in Michigan, touted the U.S. economy under Trump and called the House proceedings “a disgrace.”