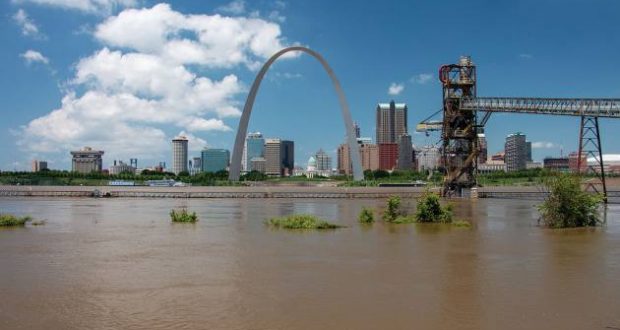 Rain is expected across Missouri the next 10 days just as rivers are cresting along the eastern side of the state.

Rivers and lakes continued to fill and crest, breaking years of records dating back to 1993 and earlier, pouring over levees and barriers, covering highways, bridges and towns. There have been over 35 flood-related deaths in the region so far, according to NWS.  Missouri has seen over 25% of its highways closed at one time because of flooding with some areas approaching 35%.

The midwest has been hit hard with storms this spring. In addition to rain, thunderstorms brought a slew of tornados – over 500 in May alone, according to preliminary reports from the National Weather Service (NWS).

“The US is split in two for hundreds of miles,” says Mr Hurst, who is the president of the Missouri Farm Bureau, describing the water’s sprawl from north of Omaha, Nebraska, down past St Louis, Missouri.

As of this week, around 200 river gauges along the Mississippi, Missouri and Arkansas rivers are still reporting flood levels, according to the National Oceanic and Atmospheric Administration (NOAA).

“We’ve seen more flooding in the past decade than we’ve seen in the decades before. This has gone past that into something historic.”

It’s “unusual” for the Great Plains and Midwest, he notes, to see this number of repeated strong rain storms and severe weather in one spring.

Part of that could be because of El Niño – a natural weather event that brings unusually warm sea-surface temperatures to the Pacific.

“El Niño conditions tend to enhance precipitation and severe weather over the areas that are flooding,” Prof Munoz explains.

The Mississippi River system contains an elaborate network of dams, levees and spillways, run by the US Army Corps of Engineers, Prof Munoz says.

“These management efforts have straightened, steepened, and narrowed the river, and our research has shown that these changes cause floodwaters to flow higher and faster.”

In 1993, following persistent spring and summer storms, the waters of the Mississippi lurched over their banks and flooded 400,000 sq miles across nine states. Fifty people died. Damages were close to $15bn (£11bn).

It rained nearly every day in June and July of 1993. Forecasts for 2019 predict between 33-50% chances of above-average rainfall on the Midwest’s already water-logged soil.

More rain is expected across the state this weekend.