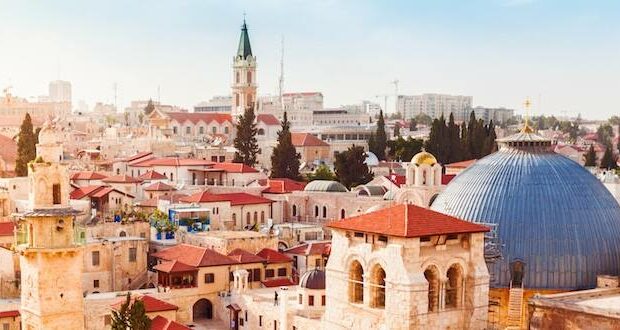 The Old City of Jerusalem.

Radical fringe groups in Israel are trying to drive the Greek Orthodox Church out of Jerusalem, according to the local head of the church.

“Our presence in Jerusalem is under threat,” Theophilos III, patriarch of the Orthodox Church of Jerusalem, wrote in an op-ed in “The Times” (of London). He says that actions by the extremists are causing the Christian community in Jerusalem is suffering greatly. “Our brothers and sisters are the victims of hate crimes. Our churches are regularly desecrated and vandalized. Our clergy are subject to frequent intimidation.”

He believes the “sworn intent of these radical groups is to extinguish the light of the Christian community from the Old City.”

The patriarch noted that the very small radical groups, which are “not representative of the state of Israel or the Jewish people,” are seeking to purchase “through illegitimate transactions” two big buildings at the Jaffa Gate area, which lies on the pilgrim route to the Church of the Holy Sepulcher. The church was built on the spot where both Roman Catholics and Orthodox Christians believe Jesus was crucified, buried and resurrected.

“Local families, who have lived here for generations, will be made to feel unwelcome in their own home and pilgrims who have longed to visit the birthplace of the Christian faith will have their experience diminished,” Theophilos said. “By working to exclude one community, the Christians, these radicals pose an existential threat not only to the Christian family but to Jerusalem itself, a point upheld by so many of our Jewish cohabitants of the Holy Land.”

Take a virtual tour of the Old City:

The Old City, which is part of what was known as East Jerusalem until it was reunited by Israel after the Jordanian occupation of 1948 to 1967, has sites sacred to Judaism, Christianity and Islam. Before Christmas, the patriarchs and heads of churches in Jerusalem spoke with concern about the rising trend of violence against Christians in the Holy Land, often at the hands of Palestinians.

But it is not just radical Jewish groups harassing the church but Muslim extremists as well.

“Since 2012 there have been countless incidents of physical and verbal assaults against priests and other clergy, attacks on Christian churches, with holy sites regularly vandalized and desecrated, and ongoing intimidation of local Christians who simply seek to worship freely and go about their daily lives,” they said in a statement. “These tactics are being used by such radical groups in a systematic attempt to drive the Christian community out of Jerusalem and other parts of the Holy Land.”

The Israeli government and public safety officials are investigating the groups while Jewish individuals and organizations come to the defense of the Christian community.

Previous: On this day in history: Athanasius – Defender of Orthodoxy
Next: Tim Tebow challenges Christians to find and live out their “micro-mission” for God