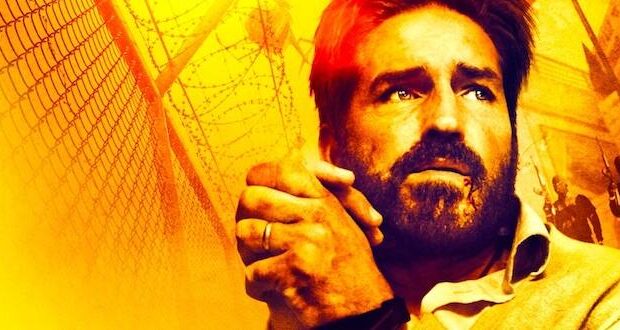 Inspired by a true story, the new movie Infidel begins in Iran, with a man on the brink of being executed. As the trigger is pulled, he closes his eyes and there’s a flashback to six months earlier in Washington D.C..

Doug, (Jim Caviezel, Passion of the Christ) who is an influential Christian blogger, is picking up his wife Liz, from her work at the state department. The couple head to a graduation party for their close friends, Javid and Soheila, daughter, Meena. Javid and Soheila are from the Middle East and are Muslims.

Later, Doug travels to Egypt after being invited to talk on Egyptian television about recent uprisings there, and obviously, his faith. Liz pleads with him not to preach his faith while there. He does so unashamedly and becomes a media sensation. He’s wrongly accused of being a spy and is kidnapped. Liz hears the whole altercation happen over the phone and immediately tries to get the U.S. government to help with few results.

Liz works for the U.S. State department and when she finds out the U.S. doesn’t want to help save her husband, she takes matters into her own hands and boards a flight to the Middle East to rescue him just as she learns Doug has been moved to Iran.

Produced by New York Times #1 author and noted documentarian Dinesh Joseph D’Souza, the film provides audiences with a thrilling, action-packed ride making current headlines come alive. With incredible acting performances by the main characters, especially Caviezel as the hero, as well as by Hal Ozsan as the villain, Ramzi, the film is getting good reviews.

Infidel clearly lays out the gospel, though that is not the primary aim.  It has a very strong Christian worldview as the main character clearly proclaims the Gospel of Jesus Christ and would rather die than denounce his faith that Jesus is God.

Christians may be taken aback by some language and scenes of violence. In an interview, D’Souza stated that he wanted the movie to feel real and said the language is a part of the secular world. He also said many would rather close their eyes to the atrocities Christians face. Christian reviewers have likened the movie’s violent scenes to the need for The Passion of the Christ to show the brutality of the crucifixion, something that made many moviegoers wince at the time.

Infidel is a thrilling action-packed movie unlike any faith-based movie in the last decade. The acting is top notch. Hal Ozsan brings a captivating performance as the charismatic villain, while Jim Caviezel, of The Passion of the Christ, becomes his character. The movie has constant jeopardy which leaves the audience wondering who will live and who will die all the way until the very end.

The film does have a very strong Christian worldview, with an overt witness to the Gospel.  It is definitely not politically correct and shows what life is like for Christian believers in much of the Middle East, and the growing movement to not label terrorism as terrorism. For that reason, some secular critics have panned the film in this era, when all villains are suppose to be big business, Russian or drug cartels.

Infidel has been #1 at theaters the last week, so moviegoers must have connected to its theme. If you don’t fear the theater, this may be the movie for you to connect with this weekend.