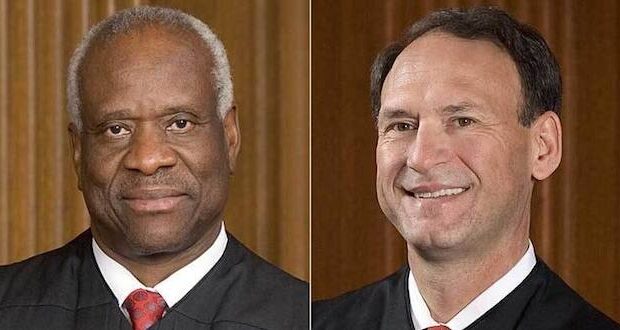 Although the U.S. Supreme Court declined to review the way Pennsylvania conducted its presidential election because of the timing of the case, Justice Clarence Thomas expressed concern about the potential for fraud.

Weeks before the November election, a gridlocked and time-strapped U.S. Supreme Court had decided not to rule whether the Pennsylvania Supreme Court had acted lawfully” by extending the mail-in ballot deadline, The New York Times reported.

Speaking of the 10,000 segregated ballots, Thomas says “We are fortunate that the Pennsylvania Supreme Court’s decision to change the receipt deadline for mail-in ballots does not appear to have changed the outcome in any federal election,” he wrote. “This court ordered the county boards to segregate ballots received later than the deadline set by the legislature. And none of the parties contend that those ballots made an outcome-determinative difference in any relevant federal election. But we may not be so lucky in the future.”

Thomas also criticized the concept of mail-in ballots, arguing it raises the prospect of cheating.

“As election administrators have long agreed, the risk of fraud is vastly more prevalent for mail-in ballots,” he wrote. “The reason is simple: ‘Absentee voting replaces the oversight that exists at polling places with something akin to an honor system.’”

Thomas quoted Yale Law School Dean Heather Gerken. “She explained in the same New York Times article that absentee voting allows for ‘simpler and more effective alternatives to commit fraud’ on a larger scale, such as stealing absentee ballots or stuffing a ballot box, which explains ‘why all the evidence of stolen elections involves absentee ballots and the like,’” he said.

In his dissent Monday, Justice Thomas wrote, “At first blush, it may seem reasonable to address this question when it next arises. After all, the 2020 election is now over, and the Pennsylvania Supreme Court’s decision was not outcome determinative for any federal election.

“The decision to leave election law hidden beneath a shroud of doubt is baffling. By doing nothing, we invite further confusion and erosion of voter confidence. Our fellow citizens deserve better and expect more of us,” the judge added.

Justice Samuel Alito wrote a dissent joined by Justice Neil Gorsuch, arguing the cases presented “an important and recurring constitutional question.” That question, Alito wrote, is “whether the elections or electors clauses of the United States Constitution are violated when a state court holds that a state constitutional provision overrides a state statute governing the manner in which a federal election is to be conducted.”

The Supreme Court did not address the late-night ballot counting that occurred after poll watchers had left for the evening.