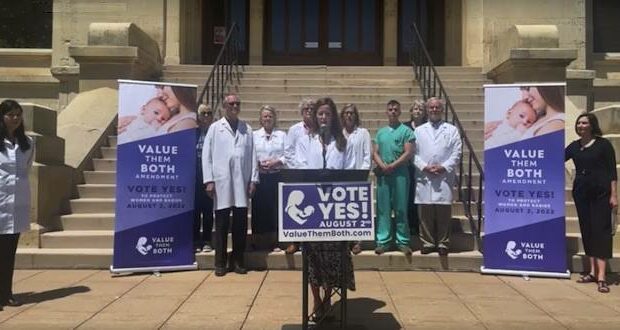 Kansas medical and mental health professionals announced Friday their support for the pro-life Value Them Both constitutional amendment. The measure would overturn a controversial Kansas Supreme Court decision in 2019 that declared access to abortion a “fundamental right” under the Kansas bill of rights.

“We’re here to represent over 200 Medical and Mental Health Professionals in support of the Value Them Both Amendment,” said Dr. Kelly Byrd of the Kansas City area, who represents the coalition. “We came together through colleague-to-colleague outreach because all of us share a dedication for caring for the physical health and emotional well-being of our patients.” She announced the group had written an open letter to explain why passing the amendment “is vital to returning our state to a place where the abortion industry is not left unlimited or unregulated and should not be allowed to police itself.”

The group, which is expected to gain even more supporters with the public announcement, currently consists of more than 120 doctors, including nine OBGYNs, 70 family medicine physicians, and additional representatives from the fields of neurosurgery, cardiology, anesthesia, surgery, pediatrics, internal medicine, pathology, emergency medicine, and other essential specialties. Pharmacists, nurses, and licensed psychotherapists and counselors round out the coalition.

Watch the press conference below:

“We serve patients daily, embracing core professional principles to protect informed consent and, above all, to do no harm,” the open letter states. “Informed consent is an essential tenet of respect for a person’s dignity. As professionals, we stand united and resolved that patients be provided all relevant facts about any intervention that may alter their life or body. Drawn to the service of humanity, our life’s work is dedicated to healing and rejects actions that will cause irreversible harm.”

It lists the laws that are at risk in Kansas if the Value Them Both Amendment is not passed. They include:

“Without the Value Them Both Amendment,” the letter states, “Kansas faces the imminent danger of becoming an abortion destination state with unregulated facilities providing unlimited abortions.”

“The court decreed that virtually any limitation or regulation on abortion are presumed unconstitutional,” said Gilbert who provides full-spectrum primary care, including women’s health and obstetrics. “This sweeping 2019 ruling was then used to strike down basic protections for women, including standard inspection, safety, and sanitation requirements for abortion facilities. Sadly, Kansas is a destination for extreme abortions”

Mackenzie Haddix, spokesperson for the Value Them Both Coalition, which is leading statewide grassroots efforts to promote passage of the amendment on August 2, expressed appreciation for the unwavering and unified support.

“We know that highly-educated medical and mental health professionals are the most valued and respected voices when it comes to the health and well-being of women and children,” she said in expressing gratitude for their support. She also thanked the “hundreds of thousands of Kansans who share the belief that women deserve better than to be left vulnerable to an unregulated abortion industry.”

The amendment states: “Because Kansans value both women and children, the constitution of the state of Kansas does not require government funding of abortion and does not create or secure a right to abortion. To the extent permitted by the constitution of the United States, the people, through their elected state representatives and state senators, may pass laws regarding abortion, including, but not limited to, laws that account for circumstances of pregnancy resulting from rape or incest, or circumstances of necessity to save the life of the mother.”

According to the amendment, “A vote for the Value Them Both Amendment would reserve to the people of Kansas, through their elected state legislators, the right to pass laws to regulate abortion because there is no Kansas constitutional right to abortion or to require the government funding of abortion.

“A vote against the Value Them Both Amendment would make no changes to the constitution of the state of Kansas and could prevent the people, through their elected state legislators, from regulating abortion in many circumstances. It would leave in place the newly discovered right to abortion first recognized in 2019.”

“The Value Them Both Amendment protects the bipartisan supported limits on the abortion industry that protects both women and their babies,” said Jeanne Gawdun, director of government affairs for Kansans for Life (KFL).

The coalition is encouraging other health professionals to join the coalition. You can also follow the group’s Facebook page.