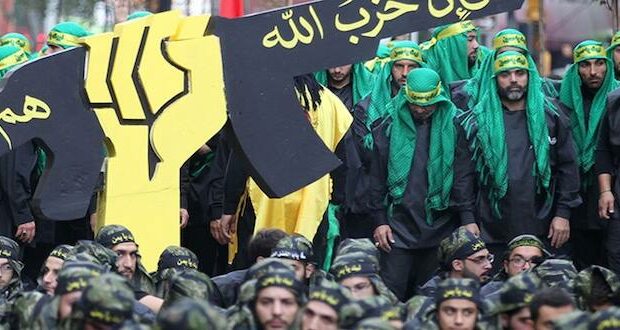 As the masses across Lebanon deal with a collapsing economy and a paralyzed government, murmurings of dissatisfaction with Hezbollah, Iran’s terror proxy in Beirut, have begun to surface. But experts say it is unrealistic to believe Hezbollah’s iron grip on the country will loosen.

These simmering tensions were expressed even more publicly in a televised speech made by Lebanese President Michel Aoun on Dec. 27, when he called for a “national dialogue” to confront the country’s political and social issues. Aoun warned that Lebanon was “falling apart,” and urged swift action on financial reforms. He also made what could be considered a veiled demand of Hezbollah, seemingly urging the terror group to loosen its grip on Lebanese politics.

“The deliberate, systematic and unjustified disruption that leads to institutions dismantling and the dissolution of the state must stop,” Aoun said. 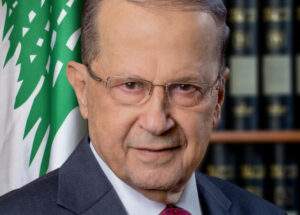 Lebanon’s Cabinet has not met for three months, and the investigation into the deadly ammonium nitrate explosion at Beirut’s port in August 2020 has stalled out of fear of offending Hezbollah. Together with the Shi’ite Amal party, Hezbollah has blocked the Cabinet meetings over demands for the dismissal of Judge Tarek Bitar, who is investigating the explosion, which killed more than 200 people.

Hezbollah’s absolute control of Lebanon has led to the current catastrophic economic collapse. As a result, approximately 80 percent of Lebanon’s population is now living in poverty, according to a September study published by the U.N. Office for the Coordination of Humanitarian Affairs.

In yet another blow to the country, the Lebanese pound on Tuesday crossed the symbolic threshold of 30,000 to the dollar on the black market in a new record low, according to websites monitoring the exchange rate.

IDF Col. (ret.) Dr. Jacques Neriah, a special analyst for the Middle East at the Jerusalem Center for Public Affairs, told JNS that Hezbollah and Amal “have done everything possible in order to paralyze the government and impose their rule.”

It was Aoun’s alliance with Hezbollah that allowed him to assume the country’s presidency in 2016, and his Maronite Christian party’s past support for Hezbollah has allowed the group some measure of political freedom. However, this strategic alliance has now become strained, particularly in the run-up to Lebanon’s scheduled May 15 elections.

While some may hope that Aoun’s veiled, yet public, denouncement of Hezbollah can lead to change and possibly even the banishment of the terror group, others are less optimistic.

Eyal Zisser, vice rector of Tel Aviv University and a lecturer in the school’s Middle East History Department, told JNS that such ambitions are unrealistic.

“I am afraid it will not happen,” he said. “Hezbollah is deeply rooted within the Shi’ite society.”

In Zisser’s view, ridding Lebanon of Hezbollah “will have to wait.” 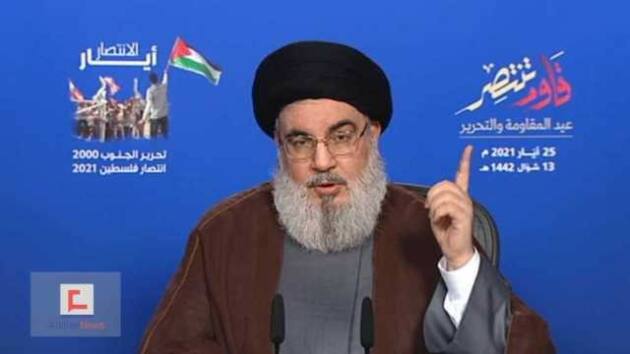 Hezbollah Secretary-General Hassan Nasrallah delivers an address marking “Resistance and Liberation Day,” on May 25, 2021, commemorating the “liberation of Lebanon’s south” in 2000 and the “Palestinian victory” in 2021. Source: Al Manar.

Adding to Lebanon’s woes, the country has found itself at odds with the Gulf Cooperation Council (GCC), which includes Saudi Arabia, Bahrain, the United Arab Emirates and Kuwait, after Lebanon’s Information Minister George Kordahi criticized the Saudi-led military intervention in Yemen during an interview aired in September.

In reaction, Saudi Arabia expelled Lebanon’s ambassador, banned all imports from the country and forbade its citizens from traveling to Lebanon.

Saudi Arabia also slammed Lebanon’s failure to stop the export of drugs from Hezbollah-controlled ports to the Kingdom and criticized Hezbollah’s hijacking of Lebanon’s government. The Saudis also slammed Hezbollah for providing support and training to the Houthi terrorist militia.

Kordahi has since resigned his position in an attempt to help make amends between Lebanon and the GCC.

Various leaders and officials who have involved themselves in Lebanon’s crisis have all failed to adequately discuss the elephant in the room, that is, Hezbollah.

“Lebanon is not a failed state yet, but it is a failing state, with a government failing its population,” the U.N. special rapporteur on extreme poverty and human rights, Olivier De Schutter, said at the end of a 12-day visit to the country in November. The special rapporteur’s comments did not mention Hezbollah.

In December, U.N. Secretary-General Antonio Guterres visited Lebanon and reaffirmed the world body’s commitment to supporting the country, and urged it to hold parliamentary elections on time.

Guterres called on Lebanon to “achieve reforms” and praised the country’s “generosity” for hosting Syrian refugees. But he failed to mention the country’s treatment of the tens of thousands of Palestinian refugees and their descendants, many of whom live in refugee camps that are scattered across the country.

Similarly, French President Emmanuel Macron visited Lebanon twice in 2020 in an attempt to influence change, but his efforts proved futile. And France’s refusal to designate Hezbollah as a terrorist organization only fuels the problem. Macron is now working to patch relations between the GCC and Lebanon.

According to Neriah, while Lebanon is marketed as a tourist spot with beautiful beaches, it is actually “the most racist state that exists in the Arab world.” 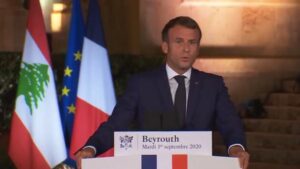 He pointed to three reasons for this. First, he said, Palestinians have fewer rights than Lebanese citizens. Second, foreign workers are treated as slaves. Third, Lebanon employs Syrians but institutes a strict curfew between 7 p.m. and 6 a.m.

“These are the Nuremberg laws in Lebanon,” he said. “When talking about Lebanon, it is important to be aware of the other side of Lebanon,” which he said is “being held hostage by Hezbollah.” In turn, Hezbollah “receives its instructions from Tehran,” noted Neriah.

Jonathan Spyer, a fellow at the Jerusalem Institute for Strategy and Security and the Middle East Forum, told JNS that tensions between Aoun and Hezbollah “are not new” and “have been apparent since he became president” in 2016.

“The current financial crisis and the fact that Aoun’s presidency is drawing to a close has exacerbated this dynamic,” he said.

Spyer said he believes this is significant since “it shows that [Iran’s] Islamic Revolutionary Guard Corps strategy of implanting ‘two, three, many Hezbollah’ in Arab countries has the inbuilt flaw that it produces social and economic failure. This is most apparent in Lebanon now, and Aoun is clearly trying to offer a counter-trend to this, advocating the repairing of relations with GCC countries.”

However, Spyer also said it is “crucial to note the inbuilt limitations of this. The part of the IRGC ‘Hezbollah strategy’ that works is the hard power piece.”

“Aoun and others can make life complicated for Hezbollah and the Iranian interest,” he said.

That interest includes more control over the eastern Mediterranean and maintaining a massive missile arsenal aimed at Israel.

But like Zisser, Spyer was doubtful of prospects for change. At least for now, and probably in the future, he said Aoun and others “cannot and will not offer a frontal challenge to the core strategic path of Iran and Hezbollah in Lebanon.”