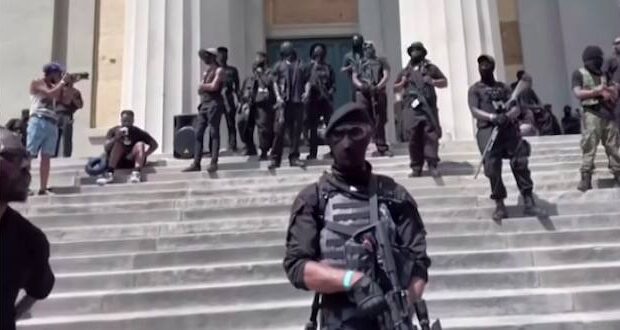 Riots spread to several cities across the nation overnight with two Louisville, Ky. police officers being shot. The riots were in response the jury verdict over the death of Breonna Taylor.

The officers were shot shortly after 8 p.m. Louisville Metro Police Department (LMPD) interim police Chief Robert Schroeder said during a press briefing that both officers were in a stable condition with non-life threatening injuries. One was still undergoing surgery while the other was now alert in the care of Louisville University Hospital.

One person has been taken into custody in connection with the shootings, Schroeder added.

A Kentucky grand jury brought no murder charges against any of the three Louisville police officers involved in the shooting that led to Taylor’s death during a warranted drug trafficking investigation gone wrong on March 13, officials announced earlier Wednesday.

One former police officer, Brett Hankison, was indicted for wanton endangerment after he blindly fired 10 shots into Taylor’s apartment when his colleague was shot in the leg by Taylor’s boyfriend.

In March, Taylor was accidentally shot six times in her home by officers who had announced themselves before executing a search warrant for her boyfriend Kenneth Walker. Walker, a career criminal and active drug dealer, may have been the intended subject of the police action.

Officers knocked on the door and announced themselves before entering the residence.

Walker says he did heard the knocking but began shooting when the police opened the door. He shot at police, injuring one before fire was returned, hitting Taylor who stood behind Walker.

The late night search was not a “no-knock” one, Kentucky Attorney General Daniel Cameron, a Republican, confirmed.

Potential violations of federal law in connection with the raid are still being investigated by the FBI.

The FBI Louisville SWAT team said it responded to the shooting and would continue to assist in the investigation.

No further information about the shooting has been made available. LMPD didn’t immediately respond to a request for comment.

For only the third time since rioting began in May, Democrat presidential nominee Joe Biden issued a statement on rioting saying: “Even amidst the profound grief & anger today’s decision generated, violence is never & can never be the answer. Those who engage in it must be held accountable. Jill & I are keeping the officers shot tonight in Louisville in our prayers. We wish them both a swift & full recovery.”

President Donald Trump said on Twitter that he was praying for the two officers and that the federal government stood ready to help Democratic Kentucky Gov. Andy Beshear if called on for support.

Black Lives Matter protesters and agitators had started marching from Jefferson Square Park to Broadway in Louisville on Tuesday evening after Louisville Mayor Greg Fischer declared a state of emergency, signing two executive orders “which allows him to exercise any of his emergency powers.” The order was issued earlier this week.

On Wednesday, streamed footage of the growing protests showed protesters calling for violence, with some saying they should burn the city down.

The National Guard was activated, according to reporters in the city around midday. Some protesters were arrested.

Previous: Police officer indicted in Breonna Taylor case but not for her death
Next: Bloomberg pays fines so 30,000 Florida felons can vote in Nov.