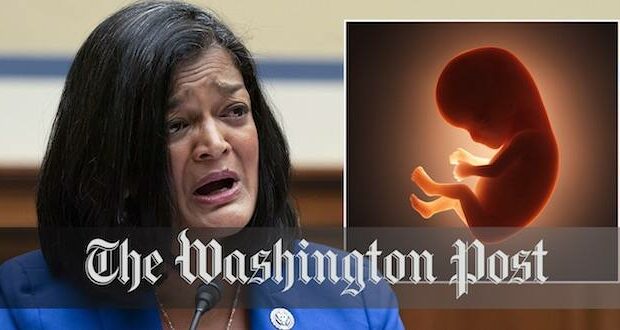 The Washington Post awarded Rep. Pramila Jayapal, D-Wash., two “Pinocchios” for her false claim that the “majority” of Americans oppose the Hyde Amendment. It bans the use of federal funds to provide abortions.

The liberal Congresswoman’s claims come as Democrat Sen. Joe Manchin of West Virginia said he will not vote for the proposed multi-trillion-dollar infrastructure bill unless it restores the pro-life Hyde Amendment.

On Sunday’s “State of the Union,” CNN’s Dana Bash asked Rep. Pramila Jayapal, D-Wash., about Manchin’s comments. “The Hyde Amendment is something that the majority of the country does not support,” she responded.

CNN did not correct Jayapal.

Jayapal, chair of the House Progressive Caucus, has said she has enough votes to kill President Biden’s proposed $3.5 trillion spending bill if it does not include progressive priorities. Jayapal is an outspoken supporter of abortion. During a House Oversight Committee hearing last week, she shared the story of her own abortion, as did Rep. Cori Bush, D-Mo., and Rep. Barbara Lee, D-Calif.

However, polls consistently show that Americans oppose forcing taxpayers to fund abortion-on-demand. A strong majority of all Americans, including two-thirds of registered independents and 31 percent of Democrats, oppose federal funding of abortion, according to the most recent Marist/Knights of Columbus poll released in January. Even stronger majorities, 77 percent of Americans and 55 percent of Democrats, oppose taxpayer funding for abortions overseas.

“Surveys taken in the past three years debunk much of what the left believes, not just about public support for government-funded abortions but also about how attitudes on that issue intersect with gender, class and reproductive freedom,” William Saletan of “Slate” wrote in 2019, citing a series of other polls that come to the same conclusion.

Polls consistently show that Americans support limits on abortion, including the time it may be performed, the conditions under which abortion should be legal and who pays for it. Years of polling data show that the Hyde Amendment and other policies that protect taxpayers against having to pay for most elective abortions have strong and steady support across political parties.

The Hyde Amendment has lived on through annual appropriations bills for nearly 45 years. It has faced its toughest opposition since 2019 following then-presidential candidate Joe Biden’s announcement that he would oppose it, despite his previous support for it while serving as a U.S. Senator.

Christian and pro-life Democrats now say they regret their support of Biden in the 2o2o election, given, they said, because of his outreach to the pro-life community.

Previous: Judge jails grandmother for Jan. 6 Facebook posts, not for entering Capitol
Next: Fear of the mark of the beast not a valid reason to avoid vaccine, scholars say