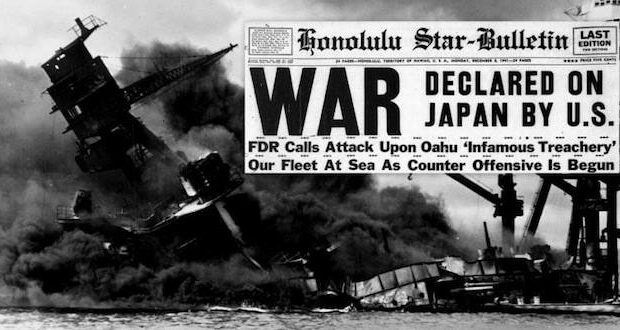 Yesterday, on the anniversary of the Japanese attacks on Pearl Harbor, we learned that memories of that event are fading fast. Interviews on the streets with young people found little understanding of that day.

The heroes World War II created are dying at a rapid rate. Col. Edward Shames, the last of the “Band of Brothers” of the 101st Airborne immortalized by Stephen Ambrose and the HBO series, died last Friday at age 99. Former Senator Robert Dole from Kansas died on Sunday at the age of 98.

Before long, the war will have entirely departed living memory. But the infamy will remain.

Out of the clear blue sky of an Oahu Sunday morning, the navy of the Empire of Japan launched a pre-emptive surprise attack on the United States naval base at Pearl Harbor in what was then the territory of Hawaii. The attack commenced at 7:48 a.m. local time, which was mid-day on the East Coast. Before Pearl Harbor’s defenses could be roused — there had been a party the night before, as nobody expected trouble — Japanese planes descended raining bombs; 2,335 Americans were killed in a war in which they thought their country was still neutral. The dead were mostly sailors, half of them on the USS Arizona, one of four battleships sunk that morning. The Imperial Japanese Navy lost 64 men. It was, as Franklin D. Roosevelt branded it, “a day that will live in infamy.” The infamy lives on.

The historical what-ifs and who-knew-what-and-whens, however, are beside the point to the instant, world-changing impact of the battle.

Previous: Finding faith in “The Nutcracker,” a Christmas classic
Next: Plumber finds envelopes full of cash behind walls of Joel Osteen’s church