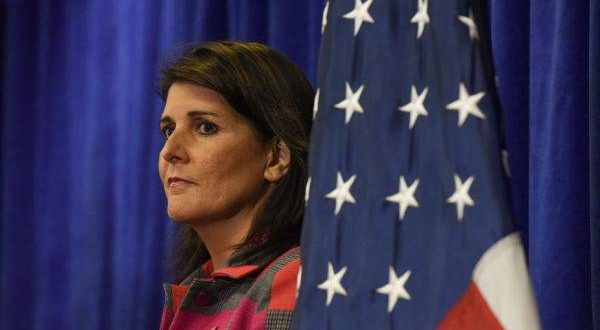 Former US Ambassador to the UN, Nikki Haley

Former U.S. Ambassador to the United Nations Nikki Haley warned at an event over the weekend that American politics is “reaching the point of hate.”

Haley was the marquee speaker at Turning Point USA’s Young Women’s Leadership Summit, where rumors and speculation about a possible Haley 2024 presidential campaign hung as a backdrop.

TPUSA President Charlie Kirk introduced her as the former U.N. ambassador and added coyly, “maybe other things in the future.” He was less subtle in his closing remarks, telling Haley he would “love” to see her become the “first woman president.”

During a 45 minute question-and-answer session with Kirk, Haley warned that the political climate is approaching dangerous levels of enmity.

Kirk was referring to the hundreds of instances in which conservatives have been abused and run out of restaurants, taunted on the streets and beaten by leftists and anarchists like Antifa, for their political views.

“My concern really is the fact that when I hear how toxic the politics are—I believe in being passionate, I do. But when it gets toxic and I say that now it’s getting to where people are calling each other evil. They’re hiding behind anonymous things and they’re saying things that are really reaching the point of hate,” Haley said.

“When I hear them call each other evil, it bothers me because I’ve seen evil. I’ve been to the Democratic Republic of Congo, where they use rape as a weapon of war. I’ve been to South Sudan where they’ve taken babies from women’s arms and thrown them into fires. … That’s evil. What we’re having in our country is a debate of ideas. That’s it,” Haley said.

“And what I worry about is that Americans are forgetting to be grateful, because on our worst day we are blessed to be in America,” she added.

At another point in the discussion, Haley highlighted her response to “The View” host Whoopi Goldberg, who had attacked Haley for her position on abortion.

Abortion was the topic at The View’s hot topics table Tuesday, and this time it was Whoopi Goldberg’s turn to get worked up over recent state bans. Just two weeks ago, Joy Behar whined that Republican men should get forcibly sterilized for passing these bans. On today’s show Whoopi raged at former U.N. ambassador Nikki Haley for daring to speak out against abortion at a pro-life gala, calling it “anti-human.”

The co-hosts began by playing a clip of Haley speaking at the Susan B. Anthony List’s gala this week, where she called out feminists for twisting the meaning of women’s rights to mean abortion rights. Whoopi exploded in anger at Haley’s comments and the pro-life movement:

Let me get this straight. So giving a women a choice about what to do with her body is anti-feminist because she — okay, look, I say it all the time. You have the right never to have an abortion. You have that right. And I support that. But what about the 9-year-old girl who gets raped by a family member or some thug in the street?…See to me, you taking choice from people is anti-human.

The irony of that last part was surely lost on the co-host. She added, “So where do the women go when they need to have a vaginal check? Where do they go? Planned Parenthood is much more than abortion clinic, much, much more. They do many more things!”

Whoopi has always exaggerated the “health care” aspect of the abortion giant, even being called out by liberal fact-checkers for making false claims about Planned Parenthood in the past.

Whoopi “made my point, because she immediately started attacking the other side without listening to what I was trying to say. I wasn’t judging anyone. I wasn’t criticizing anyone. I was saying why I continue to fight,” Haley said.

Haley also plugged her new political group, Stand for America, which she said would offer answers to Democrats’ hard left push in the 2020 primary.

She launched Stand for America in February, shortly after leaving the Trump administration, which immediately prompted speculation about her possible presidential ambitions.