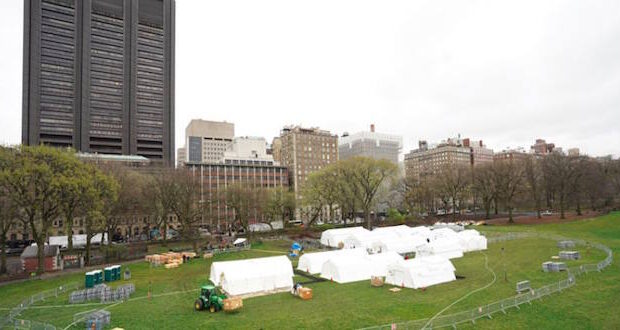 Samaritan's Purse has set up a field hospital in New York.

President Trump redirects part of WHO funding to Samaritan’s Purse

Samaritan’s Purse will receive part of the money originally earmarked for the World Health Organization. President Donald Trump halted funding to the WHO earlier this month after arguing that the U.N. body failed in its duty to adequately investigate early reports coming out of China regarding the novel coronavirus.

Before Trump’s suspension of funds, the U.S. government provided for roughly 10 percent of the WHO’s $4.8 billion annual budget. The majority of the country’s contributions were voluntary, according to the New York Post and have now been redirected to other agencies.

Trump administration officials have halted voluntary contributions from agencies such USAID, the Environmental Protection Agency and the Department of Health and Human Services, totaling between $300 million and $400 million per year. Officials with knowledge of the shift told the Post that the White House is working to move “every single pot of money” away from the WHO to other organizations.

The decision to send some of the money to Samaritan’s Purse comes as the faith-based humanitarian organization, owned by the Billy Graham Evangelistic Association and led by the Rev. Franklin Graham, is operating a 68-bed field hospital in New York City, tending to patients suffering from the coronavirus.

While most people are glad to have the Christian group’s help, there is a small but loud faction of LGBTQ activists who are angry over the organization’s presence in Central Park because of its adherence to the biblical understanding of marriage as a union between one man and one woman.

Graham addressed critics in a statement last week, writing, “Samaritan’s Purse is a decidedly Christian private relief organization, funded almost entirely by individuals around the world who share our passion for providing aid to victims of war, disease, disaster, poverty, famine and persecution — and doing so in Jesus’ name.

“It seems tone-deaf to be attacking our religious conviction about marriage at the very moment thousands of New Yorkers are fighting for their lives and dozens of Samaritan’s Purse workers are placing their lives at risk to provide critical medical care.”

Previous: High school students mock Auschwitz in ‘off to camp’ video
Next: Sister of Kim Jong-Un rises after he vanishes from public view