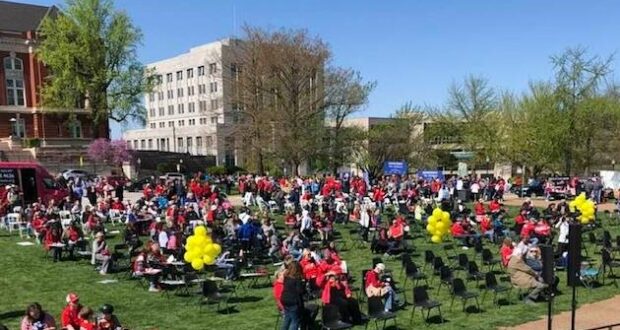 Attendees at the Midwest March for Life begin to gather for the program.

Hundreds of Missourians gathered in Jefferson City on Wednesday for the Midwest March for Life. Jeanne Mancini, president of the national March for Life, said it was among the group’s first marches open to participants since the beginning of the COVID-19 pandemic.

“I think it was a very special day for Missouri and for the rest of the country,” Mancini says. “There’s so much happening, particularly in Missouri, with regard to lessening abortion clinics, and a lot happening nationally as well. 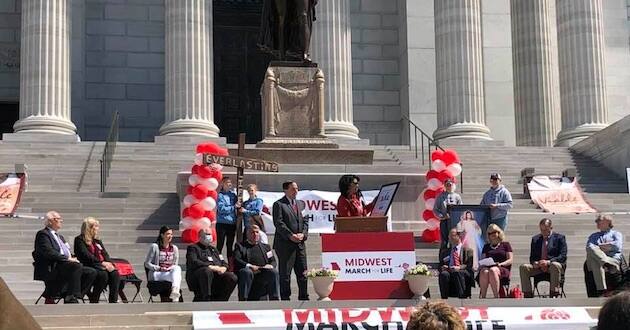 She said Missouri is a leader in the pro-life movement, both on the local level and on Capitol Hill.

“Often what we see is that a bill passed on the state level will eventually get passed at the national level,” she said. “When there is grassroots support, the national legislators listen to that. Events like today and people being involved on a grassroots level is critical, not only for the state but nationally.”

TOUR ISRAEL: We are taking our readers to Israel. Get info.

Eric Scheidler of the Pro-Life Action League awarded the Statesman of the Decade Award to Gov. Mike Parson, who thanked him via a pre-recorded message during Wednesday’s event. Lt. Gov. Mike Kehoe and Secretary of State Jay Ashcroft also were presented with Patriot for Life Awards, with Sen. Bob Onder receiving a Statesman for Life award. Ashcroft, along with several other speakers, mentioned the new presidential administration in his address.

“We’ve had a change of leadership in D.C., and that is not hopeful for us,” Ashcroft said. “But it wasn’t hopeful in 1973 when the United States Supreme Court said life in the womb had no value if the mother decided to terminate — but we are about the work of God Almighty because every life is created in the image of God. Don’t let the storm clouds sway you… Missouri is the Missouri miracle, and we can do it for the rest of the country.”

Other speakers included leadership from Missouri Right to Life, the Missouri Baptist Convention and Students for Life. According to organizer Kathy Forck, abortions in Missouri decreased to 39 in 2020 from an annual high exceeding 11,000. Missouri has one active abortion clinic.