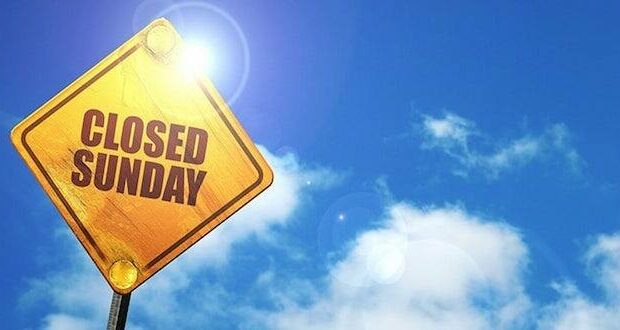 It’s not just nostalgia. Many pandemic-weary souls want to make Sunday a day of rest again.

In a hit song two decades ago, country music group Rascal Flatts offered banjo-tinged commentary on “the world spinning faster than it did in the old days.”

“Sunday was a day of rest,” the group proclaimed in its ode to a bygone era. “Now, it’s one more day for progress.”

Some of us are old enough to remember when most businesses — not just Chick-fil-A — closed on Sundays.

It seems quaint now, but I did an Associated Press story in 2003 on Family Christian Stores — then the nation’s largest Christian retail chain — deciding to open on Sundays.

But in 2016, I was surprised during a reporting trip to North Dakota when I found an empty parking lot at a Bismarck Walmart — and then at Super Target — while looking to buy a few snacks and supplies before Sunday morning church.

I learned that for more than a century, the state had required most retailers to close from midnight to noon on Sundays. North Dakota finally became the last state to lift that ban in 2019.

I bring up this subject not just for nostalgia but because the day of rest — or the lack of it — is drawing renewed consideration nationally.

Here’s why some political commentators and legal scholars are tweeting their support for taking a Sabbath. | By @kelsey_dallashttps://t.co/cE199V76HB

In a recent piece, Deseret News religion reporter Kelsey Dallas explains “why some political commentators and legal scholars are tweeting their support for taking a Sabbath”:

Even before the COVID-19 pandemic began, Americans were overworked and tightly wound. In the past two years, the situation’s only gotten worse.

Pandemic-related stress and a widespread desire for more time to rest are among the factors fueling the “Great Resignation.” They also help explain why some political commentators and legal scholars spent the weekend debating the Sabbath. …

Sabbath laws, which are also known as blue laws, were once a major part of American life. Although they came in a variety of forms, the policies had a shared purpose: limiting certain commercial activities to six days per week.

In other words, blue laws forced both business owners and the people they served to take a day of rest. And under past policies, that day was almost always Sunday.

Dallas’ report points to an interesting Wall Street Journal essay by Sohrab Ahmari from last year that explores “what we’ve lost in rejecting the Sabbath.”

A writer for Crisis, an online magazine that describes itself as “America’s most trusted source for authentic Catholic perspectives on church and state, arts and culture, science and faith,” also supports returning to a quieter Sunday.

Writer Casey Chalk declares, “Americans in those early quarantine days—after the haze of their Netflix-binge had evaporated—woke up with a surprised appreciation for what earlier generations had considered normal: Sunday laws, otherwise known as blue laws. As America returns to normality, we should consider these laws and their manifold benefits afresh.”

Chalk also approvingly quotes attorney Jay Lefkowitz, who wrote in The Washington Post about the blessings of the seventh-day Sabbath, known as Shabbat in Hebrew. “Shabbat is also a reminder of other forms of separation that add meaning to our lives—between hard work and play, and between pursuing our own dreams and caring for others,” Lefkowitz states. “Shabbat is about balance or, to use a modern word, mindfulness.”

Chalk goes on to write: “The writer also references the recent experience of Poland, whose population is overwhelmingly affiliated with the Roman Catholic Church: “In Poland, the 2017 Sunday trading ban was ‘about helping small family stores, but also about letting people who are effectively forced to work on Sundays be free,’ said President Andrzej Duda. Since the ban’s introduction, Duda has noted, more families have engaged in outdoor activities, and the domestic tourism industry has benefited.”

“We’re very careful to delay our order a day if it means they are going to deliver it on the Lord’s Day or pay attention to when it’s going to be delivered.”https://t.co/Nwn9Ns5HV5

But the idea certainly hasn’t caught on with everybody.

Christianity Today’s Kate Shellnutt has a really fascinating story this week on “Sabbatarian Christians” — that’s a new term to me — finding “their observance increasingly countercultural in a 24/7 economy.”

Not anymore. America’s biggest retailer, Amazon, ships seven days a week, and as the site expands Sunday delivery across the country, more drivers are losing what would have been a steady day off.

For many, the shift just means their break will fall during the week. But for some Christians on the job, the new delivery option conflicts with Sunday church services and their conviction not to work on the Sabbath.

Amazon’s seven-days-a-week schedule has already led to two lawsuits from drivers who were fired for not working on Sundays. Both claimed religious discrimination under Title VII, alleging their employer had not provided “reasonable accommodation” for them to work other days.

On my way to church, I often pass a long line of Amazon trucks headed out to make Sunday deliveries.

I’ve never thought much about it.

But I will now.

Previous: Update on Missouri congressional redistricting battle
Next: Dr. Martin Luther King: goals and a plan are crucial to a better life