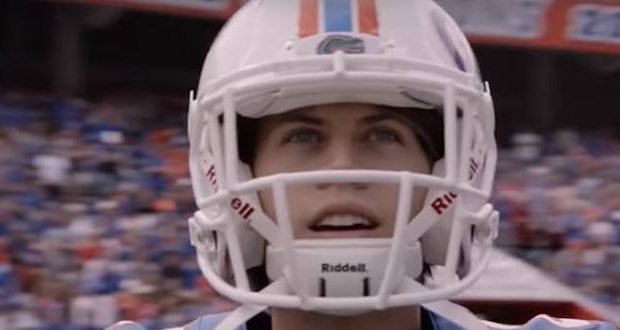 Tim Tebow, the Heisman Trophy winner and former NFL quarterback now readying for his fourth season as a minor-league baseball player, knows that being a good Christian doesn’t solve everything.

Even watching Christian movies growing up, Tebow had his doubts when the main character started praying and suddenly everything “was just perfect.”

As executive producers of the new film “Run the Race,” Tebow and his brother Robby wanted to create the kind of movie — and Christian life — he longed to see instead: one that’s not perfect, but authentic. 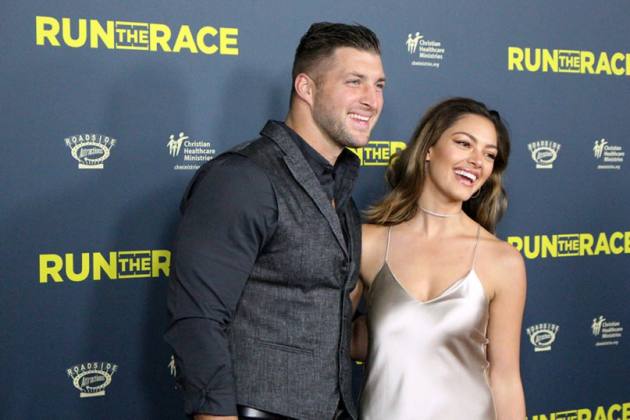 Tim Tebow and his fiancee, Demi-Leigh Nel-Peters, at the premiere of “Run the Race” on Feb. 11, 2019. RNS photo by Heather Adams

“Run the Race,” the story of two high school brothers trying to overcome their mother’s death and father’s abandonment, sticks close to the power of fraternal love and sports. Zach Truett, played by Tanner Stine, is working to earn a college football scholarship, but after he suffers an injury, he worries he’ll never find his way out of his small town.

Not wanting to give up on their dream, his brother, Dave, attempts to save both brothers’ futures by securing his own scholarship in track.

The characters, especially Zach, also spend a lot of time grappling with and asking questions about their faith — questions many of those involved in the movie, including real-life Christians Stine and Tebow, have asked themselves.

“We all go through our own faith journey. You ask the questions and you ask the why,” Tebow told Religion News Service. “Even in your lows, God loves you and he’s chasing you and he wants to know you and support you and he gave his best for you.”

Jake McEntire, who wrote the original script, was in one of those lows. By that time he had been working on the screenplay for almost a decade. “I remember being in class in 2004, just freehand writing this stuff,” said McEntire.

He rewrote it multiple times over the years, then made a “concept” trailer hoping it’d attract more people to the project. McEntire said there were multiple times he’d pray, asking God if he should give up or if God wanted him to keep going.

“I just felt like this was a calling God gave me in my heart to go tell this story,” he said.

It was on one of those days of praying and questioning whether to continue that the Tebows called, he said.

Trey Brunson, who met McEntire in college in Dallas, got to know Robby Tebow as a pastor in Florida. Six years ago Brunson, now an executive producer himself, showed the trailer to Robby, who showed it to Tim. The Tebow brothers then asked to read the full script.

It was reading the script, Tim Tebow said, that was his impetus to get into the movie industry. A popular public speaker, he said the power of McEntire’s storytelling impressed on him how limited his appearances were compared with the movies.

“It’s just another avenue to encourage people,” said Tebow, who has been supporting the movie with press and on social media. “Why not use that avenue for good, too?”

Though McEntire now had Tebow to ask about achieving in sports, the writer said that much of the film is drawn on his own sports experience.

McEntire had a scholarship to play college football before he tore his ACL and his dream of a football career went away. The mother in the film is based on a friend’s mom who had passed away from breast cancer.

“I kind of cherry-picked things that happened to me and my brothers and my best friends, the good and the bad, and put it all into one story,” he said.

Even McEntire’s relationship with his wife was used to create a storyline that is not the usual Hollywood teen romance.

McEntire knew he wanted to marry his wife three days after meeting her — something he immediately told his brothers. Six months later he bought a ring, but he continued to pray for another six months.

They were married in April 2007, 16 months after they met. “We were both virgins when we got married, so I wanted to show that purity,” he said. “I wanted to show kids that can still happen — you can have this.”

If the movie represents Christian values, it’s not a sermon from on high — the filmmakers even debated if any character should say the name Jesus, McEntire said.

Once they got to filming, in fact, “Run the Race” became a collaboration. Director Chris Dowling shares screenwriting credit with McEntire and Jason Baumgardner, and Dowling in turn allowed his actors a lot of flexibility. That spirit is what convinced veteran actor Mario Van Peebles to take the the role of Pastor Baker, who leads the church in the Truetts’ small town.

“I wanted to play this character because there were things I wanted to say,” Van Peebles said. “Some of what you see in the film is ad lib.”

While there is a lot about Christianity in “Run the Race,” Dowling said it addresses experiences many people can relate to — not least the director himself, whose father walked out on his family when Dowling was young.

“As humans we all want the same thing. We want to know we have a purpose, we want to feel loved, we want the best for our kids,” Dowling said.

Tebow hopes people see what he says is the reality of trusting in God.

Previous: North Korean survivor shares horrific testimony of torture
Next: What happened to the babies of Auschwitz?