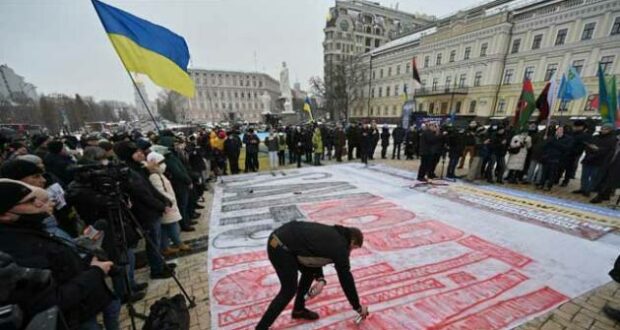 A demonstrator signs a huge placard reading “Say No To Putin” during an action dubbed #SayNOtoPutin in Kyiv on January 9, 2022. Sergei SUPINSKY / AFP

Russia evacuates citizens from Kazakhstan as it sends in “peacekeepers’

Russia may be preparing to invade Kazakhstan after its military forces evacuated more than 1,400 of its citizens from the country over the weekend. The move comes as political unrest continues to unfold across the central Asian republic.

“The transport aviation planes delivered a total of 1,461 Russian citizens from the Republic of Kazakhstan to Russia,” the Russian Ministry of Defense told a news conference, news agency TASS reported.

The federal agency revealed that 1,422 Russians were transported by air to Moscow on Jan. 9, while 14 were flown to Yekaterinburg. A total of 25 tourists who opted to return from Kazakhstan were transported as well. Russians are not native to Kazakhstan but relocated there after the country became a Soviet satellite. Russians became the ruling class and bitterness towards them still remains from native Kazakhs.

The evacuation order comes amid massive protests in Kazakhstan that descended into violence last week, marking the worst unrest the former Soviet nation has faced since gaining independence 30 years ago.

Authorities declared on Monday that Kazakh police detained nearly 8,000 people so far in the unrest that saw 164 people officially killed during ongoing violence.

There are unconfirmed reports from Kazakhs on social media sites like Twitter that the actual death toll is much higher as government forces implement President Kassym-Jomart Tokayev’s order to “shoot to kill, without warning.”

Nationwide protests, which started on Jan. 2 in the west of the country in the city of Zhanaozen and the Mangistau region, began in response to an increase in the price cap for propane gas to 120 tenge (27 cents), from last year’s 60 tenge (14 cents).

Meanwhile, Kazakhstan is also facing a cash and food shortage after KazakhTelecom, the government-owned telecommunication giant, began throttling Internet access on Jan. 4, leaving residents unable to get access to their money after debit card terminals, which rely on the Internet and dominate retail outlets across the country, were shut down.

Authorities have declared a state of emergency over the ongoing violence, and Tokayev requested help from the Collective Security Treaty Organization (CSTO), a Russian-aligned bloc of former soviet countries, for international support.

The CSTO has sent in peacekeeping troops from Tajikistan, Kyrgyzstan, Armenia, Belarus, and Russia, while the Russian Ministry of Defense has said that it is deploying more than 70 Il-76 and five An-124 aircraft of the “Russian contingent of the CSTO peacekeeping forces to Kazakhstan around the clock.”

A Russian-led military alliance said last week that it would send “peacekeeping forces” to Kazakhstan at the invitation of the country’s president to help put down a growing protest movement there.

The current chairman of the alliance, the Armenian prime minister, Nikol Pashinyan, said in a statement that the troops would be stationed there only “for a limited time period,” until order could be restored.

Previous: Vaccine passport is not mark of the beast, says Franklin Graham
Next: January C5Alive Luncheon will feature local pastor