Home / Faith / Vaccine passport is not mark of the beast, says Franklin Graham 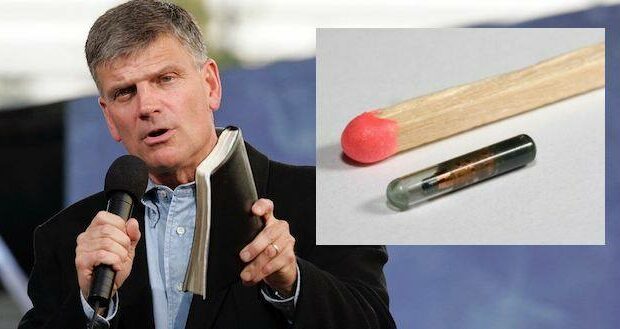 Vaccine passport is not mark of the beast, says Franklin Graham

When it was reported that a vaccine passport microchip implant has been developed, some Christians questioned whether it could be the biblical mark of the beast. It is not, evangelist Franklin Graham says.

“I personally do not think this particular chip is the mark the Bible talks about, but it does make you think how close we may be,” he wrote. “Christians around the world are wondering if COVID-19 is being used as a way to condition the world population to accept a mark like this, whatever form it may take. If a scannable chip under the skin can contain vaccine information, adding other personal information and financial data could be a short step away.

YOU CAN HELP: Donate $1 to support faith-based and fact-based journalism

“This may sound frightening; but people who have put their faith in God and his son, Jesus Christ, don’t need to be afraid. We should not live in fear. God told us what was coming in his word. Make sure that your name is written in the lamb’s book of life by repenting of your sins and putting your faith and trust in Jesus Christ.”

Many Swedes have opted to have microchips the size of a grain of rice implanted under their skin. The microchips contain identifying information and vaccination data for those who receive the implants. The Swedish government implemented new rules on December 1 requiring people to have a vaccine passport verifying their inoculation status for all events with 100 or more people.

Graham has been an outspoken advocate of vaccines. Last March, he wrote in a Facebook post that he believes Jesus would have supported inoculation against COVID-19 had the pandemic occurred during his earthly ministry.

“I have been asked my opinion about the vaccine by the media and others,” Graham wrote. “I have even been asked if Jesus were physically walking on earth now, would he be an advocate for vaccines. My answer was that based on the parable of the Good Samaritan in the Bible, I would have to say, yes, I think Jesus Christ would advocate for people using vaccines and medicines to treat suffering and save lives.”

But while the microchip may not be the mark of the beast, it doesn’t mean there’s no need to worry. Governments and even businesses could use the information in ways that do not benefit the consumer.

TheIntercept.com reports “When biometric data — bodily attributes digitized — are married to surveillance technology, both the potential for profit and the ambitions of the techno-futurists inflate without limit. One industry analyst predicts the global biometrics market will grow 15 percent annually, reaching nearly $105 billion by 2028. The British tech firm Onfido envisions a seamless EU-wide identify verification, or IDV, system for online gambling, telemedicine, car rentals, electronic voting, “and more.” Scientists in academe and industry are working on a global biodata repository. It would be naïve to assume these networks would not be linked.”

Previous: Trouble brewing: Economists say coffee prices to double in 2022
Next: Russia evacuates citizens from Kazakhstan as it sends in “peacekeepers’