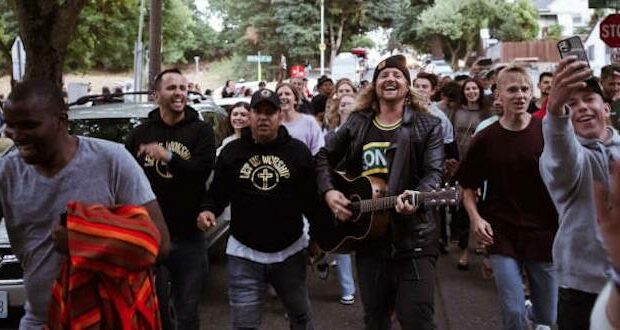 The attack by Antifa last weekend on a Portland prayer and worship gathering held by Sean Feucht made national headlines. What wasn’t reported in the secular media is that Feuecht, founder of Hold the Line, reports that a member of Antifa accepted Christ at the “Let Us Worship” rally.

“Antifa stood 10 feet from me as we lifted our voices in praise, but we didn’t back down,” Feucht posted to Instagram on August 9. “One member of Antifa who came to disrupt our service was saved by giving his life to Jesus.”

Following a coordinated violent attack on Christian families in Portland by antifa, thousands gathered to worship at same spot next day under protection of volunteer security. After event, clashes erupted in downtown when antifa attacked people dispersing. https://t.co/2ULAxfhMM5

Antifa is the fascist domestic terrorist group that claims to be “anti-fascist” in its attacks on Christians, Republicans, the elderly, police officers, federal buildings and white-owned businesses in the cities where it operates.

The group, which typically wears all black and combat gear, was allowed to attack the event after Portland police were ordered not to intervene.

Feucht and the “Let Us Worship” rallies have drawn praise from Christian leaders across the nation for engaging young people in a way that few churches or ministries can. The gatherings have also become the target of cable news outlets and social media critics for gathering people without masks. But while most of those who attend without masks or social distancing, local health officials in all of the cities where they’ve taken place have not reported an increase in Covid cases.

So while some call them foolhardy, others say it’s miraculous.

For its part, the organization and Fuecht say they take safety into consideration. Local media, as in when they held an event on the Plaza in Kansas City, criticized the gathering as being a “super-spreader” event, without any evidence.

Mainstream media took note of the events, reporting on the miracles and revival while criticizing those who participated. Lauren Daigle, who sang at one such rally after driving by, was even booted from DICK CLARK’S ROCKING NEW YEAR’S EVE broadcast after the mayor of New Orleans complained about Daigle’s participation.

Despite the backlash, Feucht continues his rallies and posts updates on his social media profile.

In video captured at the event, the Antifa member can be seen surrounded by others as he is prayed for.

After throwing needles, pills, drugs and more at the crowd, Antifa eventually attacked those gathered as they were exiting the event, according to frequent Antifa reporter Andy Ngô. Antifa eventually threw smoke bombs and tear gas into the crowd.

Fuecht, who is approaching having hosted over 80 events, and those in attendance say they forgive the Antifa terrorists for their response to the outdoor church service.

Brian Tichenor who serves as Director of Team Xtreme International, says the events are a counter to a constant stream of bad news, especially the division in a year marked by a pandemic, riots, looting, racial division and a presidential election.

“We are tired of the crime, the violence, and everything that’s going on. Everybody is against everybody, let’s just come together and worship together,” states Tichenor.

Feucht wrote emphatically on social media of the need to continue to proclaim the Gospel, arguing that “people are scared, addicted, lonely, suicidal and hopeless – AND WE HAVE THE HOPE OF THE WORLD INSIDE OF US!!”

“THIS IS WHY WE CAN’T BACK DOWN” he wrote in all caps.

Previous: Open Doors USA encourages approval of religious ambassador nominee
Next: Life in a revolving door: connecting with others