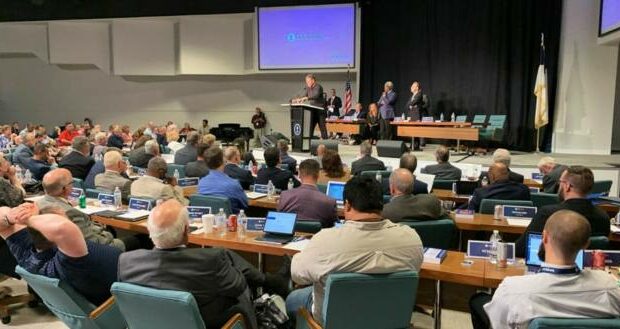 The Southern Baptist Convention continues to wrestle with questions about how to handle sexual abuse allegations.

Earlier this week, the executive committee defied the will of the denomination’s members, or “messengers,” by refusing to waive attorney-client privilege for an investigation into allegations of sexual abuse. In June, during the denomination’s annual meeting, messengers voted overwhelmingly to create a task force charged with overseeing a fully transparent, third-party investigation into the matter.

Jared Wellman, an executive committee member and pastor of Tate Springs Baptist Church in Arlington, Texas, submitted a motion during the meeting. “A historic moment in the SBC as the [executive committee] has chosen to defy the messengers in an investigation concerning themselves,” he wrote in response to the 35-40 vote against waiving privilege.

At the close of the virtual meeting, the committee voted 77-23 to grant themselves another week to try to resolve disagreements with the task force. A similar vote last week is what necessitated the meeting this week.

The focus on the issue of sexual abuse stems from an investigation by the “Houston Chronicle,” documenting the stories of 700 survivors as well as alleged efforts to keep accusers quiet. As a result, this summer, messengers called for an outside investigation, which would include a waiver of attorney-client privilege, into how the SBC’s executive committee has handled sexual abuse allegations over the last two decades

SBC President Ed Litton said he is “grieved the executive committee determined yet more time is needed before honoring the clear will of the messengers with regard to attorney-client privilege.

In a letter to the committee on Wednesday, members from across the nation stated, in part, “we write to express our frustration and disappointment with the recent actions of the Executive Committee. In June, over 15,000 messengers spoke with near-unanimous clarity by adopting the “Motion to Investigate the SBC Executive Committee.” The messengers were clear when they moved, “that the task force agree to the accepted best standards and practices as recommended by the commissioned third-party, including but not limited to the Executive Committee staff and members waiving attorney client privilege in order to ensure full access to information and accuracy in the review.”

The powerful letter went on to state, “The rejection of the messengers’ will is a repudiation of our SBC polity that endangers our continued cooperation for the sake of the gospel, and your committee’s lack of compliance is a violation of your fiduciary responsibilities as entrusted to you by the messengers.”

Litton agreed saying, “The only question that remains is whether the executive committee will pledge its full support and cooperation to this process by adhering to the messengers’ direction. I remain prayerful that the executive committee will choose to take the necessary step of waiving attorney-client privilege and demonstrate that its commitment to full cooperation is more than mere words.”