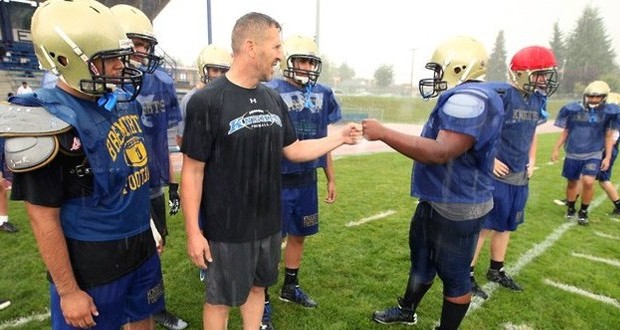 Joseph Kennedy had prayed silently at the 50-yard line after games ended and students often voluntarily joined him.

A central question before the court was if a public school employee who says he is praying by himself while at school and visible to students was engaging in “government speech” that lacks any First Amendment protection.

“The whole idea of just because I’m working there, I have no rights anymore as an American?” Kennedy told Fox News in April. “When do I stop representing the school district? And that’s what we’re kind of asking, just a simple thing. Can I pray after a football game?”

The decision is regarded as a victory for religious freedom. Kennedy had become a target of liberal media, including Sports Illustrated which waded in saying he had destroyed the separation of church and state.

In the case, the high court held that the Free Exercise and Free Speech Clauses of the First Amendment protect an individual engaging in a personal religious observance from government reprisal.

The court found that the U.S. Constitution neither requires nor allows governments to suppress such religious expression.

Kennedy, who no longer works for the Bremerton Public School District in Washington state, claimed his rights were violated when the district forbade him from praying in view of the public after games.

The school district argued that when Kennedy prayed midfield after games, he was viewed by onlookers as a coach who was serving as a mentor and role model.

But the majority of Supreme Court justices disagreed with the school district in Kennedy v. Bremerton School District (court file 21-418), an appeal from the frequently overturned U.S. Court of Appeals for the 9th Circuit.

Justice Neil Gorsuch wrote the majority opinion (pdf) for the court. All six conservative Republican-appointed justices, including Gorsuch, ruled in favor of Kennedy; all three liberal Democrat-appointed justices ruled against him.

Gorsuch noted that Kennedy lost his job as a high school football coach in the Bremerton School District “because he knelt at midfield after games to offer a quiet prayer of thanks” during a period “when school employees were free to speak with a friend, call for a reservation at a restaurant, check email, or attend to other personal matters.”

In other words, Kennedy offered “his prayers quietly while his students were otherwise occupied.”

The school district disciplined him because it believed anything less might lead a reasonable observer to mistakenly conclude that it endorsed Kennedy’s religious beliefs, Gorsuch wrote.

The district was wrong to do so, the justice added.

“The Free Exercise and Free Speech Clauses of the First Amendment protect expressions like Mr. Kennedy’s. Nor does a proper understanding of the Amendment’s Establishment Clause require the government to single out private religious speech for special disfavor.

“The Constitution and the best of our traditions counsel mutual respect and tolerance, not censorship and suppression, for religious and nonreligious views alike,” Gorsuch wrote.

Justice Sonia Sotomayor filed a dissenting opinion, which was joined by the court’s other Democrat-appointed justices: Stephen Breyer and Elena Kagan. The dissent characterizes Kennedy as not having the right to pray.

“This case is about whether a public school must permit a school official to kneel, bow his head, and say a prayer at the center of a school event,” Sotomayor wrote. “The Constitution does not authorize, let alone require, public schools to embrace this conduct.”

Kelly Shackelford, President, CEO, and Chief Counsel for First Liberty which represented Kennedy was estacit with the ruling.  “This is a tremendous victory for Coach Kennedy and religious liberty for all Americans,” shackelford says.  “Our Constitution protects the right of every American to engage in private religious expression, including praying in public, without fear of getting fired.  We are grateful that the Supreme Court recognized what the Constitution and law have always said – American’s are free to live out their faith in public.”

Paul Clement, former U.S. Solicitor General and First Liberty network attorney who argued Kennedy’s case before the Justices, said, “After seven long years, Coach Kennedy can finally return to the place he belongs – coaching football and quietly praying by himself after the game.  This is a great victory for Coach Kennedy and the First Amendment.”

In response to today’s opinion, Coach Kennedy said, “This is just so awesome.  All I’ve ever wanted was to be back on the field with my guys. I am incredibly grateful to the Supreme Court, my fantastic legal team, and everyone who has supported us. I thank God for answering our prayers and sustaining my family through this long battle.”