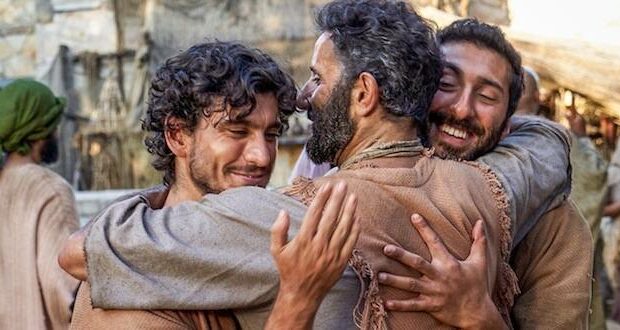 The highly-anticipated second season of The Chosen returns on Easter Sunday. Dallas Jenkins, creator and director of the series, revealed the news in a livestream event.

The first episode of the nine-episode second season will be available for streaming beginning Easter Sunday. Then, according to Jenkins, “each episode will be released as soon as it is done.” The son of famed  Christian writer Jerry Jenkis also outlined some of the production issues which challenge The Chosen.

The Chosen is a well-reviewed and critically acclaimed independent production that can be viewed via its own app (available for Apple here and Android here). It is also known for having raised the record-setting crowd-funding project for any previous media project.

The effort raised $10 million for the first season, the second season budget was also fully subscribed and Season Three already has $2 million given towards its production. The show’s producers also came up with a “pay it forward” system where people can watch The Chosen episodes for free, but choose to pay for a certain amount of episodes that can be watched by others.

In his update, Jenkins told fans that the second season is over budget and that they have not yet completed the entire season.  Jenkins pointed to weather in Texas, which experienced a rare arctic cold and snow blast, and Covid as the reasons for additional costs.  While many assume the show is filmed in Israel, it is actually produced in Texas.

“We want the authentic Jesus to be introduced to over one billion people around the world; we want our great show to do that,” Jenkins said.

The Chosen team say they plan to produce a full seven seasons of the series. Everything from the public ministry of Jesus, to his ministry and death and resurrection will be covered. Jenkins estimates that it will eventually cost $100 million.

Jenkins maintained The Chosen will continue to be available for free, relying on the generosity of viewers to fund the current and future seasons.

Fans who got to know the disciples in the first season will again see how their personalities mesh with that of Jesus and the people they encounter. The show is popular for its portrayal of everyday life around Jesus and the multitudes he served.

Tagged with: airs Bible christianity dallas jenkins easter entertainment faith history how many seasons how to watch jenkins jewish traditions passover season 2 second season streaming the chosen vidangel when does where to watch