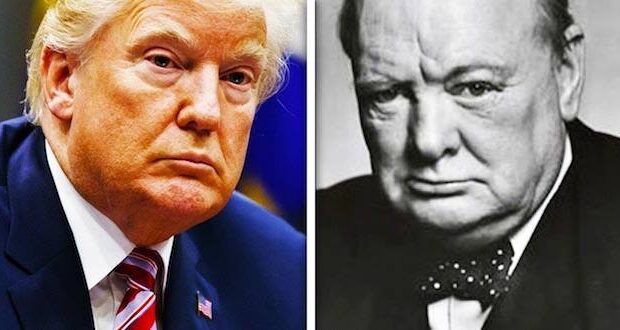 British leader Winston Churchill, like President Donald Trump, had his critics and his foibles.

It’s ironic and hypocritical that many on the left have been so desperate to criticize the President in his quest of returning power from Wasghinton to the American people. For example, in his handling of the COVID-19 crisis, the criticisms were wide and varied: Trump didn’t close the borders soon enough; he closed them too soon. He didn’t speak up enough; he spoke up too much. He took the advice of the wrong people; he didn’t listen to enough people.

Same for his allowing states to map out their own reopening stragetegies.

Even before the coronavirus pandemic, President Trump was criticized for everything from his lifestyle — although before he ran for president as a Republican, they saw nothing wrong with his past and he seemed to be the darling of the liberal media — to his beliefs. Has he done and said things that don’t reflect the teachings of the Bible? Yes. He’s imperfect, but according to some, that makes him a great leader. Is there any politician above reproach? No.

In the same way, some Christians overlook the good Trump has done and focus on all the mistakes he’s made and all the perceived weaknesses he still struggles with.

“As Christians we have created artificial standards for our leaders that God doesn’t have for His leaders in the Bible,” historian David Barton told me for “God, Trump, and the 2020 Election.” “I have flaws, Trump has flaws, and we can point them out in a self-righteous manner. Or we can look at Hebrews 11 and see all these great leaders had serious flaws, but God definitely still used them.”

Barton says conservative Christians should “look at what the president has done for the economy, but especially standing for religious liberty, appointing righteous judges, protecting unborn life, and supporting Israel — so many of the things the Bible specifically talks about. No president in our lifetime has gotten done as many biblically correct things as he has.”

Because of this, Barton says Christians must be willing to support Trump and not allow the Left to undermine his conservative agenda any longer. He points out that we don’t have to win every American to our way of thinking — we just need to win more than we have now.

Author Lance Wallnau has made the same point. “Figures like Churchill, Lincoln and George S. Patton don’t step out of cathedrals onto the stage of history, yet we canonize them later as instruments God raised up to meet a singular crisis, he said. None of these men were conventional Christians, and they had many detractors in the clergy, yet each played a pivotal role in history. They stood strong against the enemies of freedom and helped safeguard our way of life and Christian heritage.

He was called an “‘aristocratic adventurer’ who lacked good judgment and political skills.” He was considered “rootless … unstable … unsound … an undeniable cad.”

History has shown that Winston Churchill was the right man at the right time to be used by God, yet he was also not a very popular person. In fact, Churchill was described with terms that are often used in association with Donald Trump. He was called an “‘aristocratic adventurer’ who lacked good judgment and political skills.” He was considered “rootless … unstable … unsound … an undeniable cad,” according to the biography, “God and Churchill: How the Great Leader’s Sense of Divine Destiny Changed His Troubled World and Offers Hope for Ours” by Churchill’s great-grandson, the late Jonathan Sandys, and Wallace Henley. Churchill was “an embarrassment” to important people in the Conservative Party. And he was viewed as impetuous — “‘a real danger’ who … tended not to count the cost of his endeavors.”

The British didn’t like him until they needed someone very strong to defeat the Nazis. He didn’t have many fans within the Christian community, either. The conservative Christians of the day in Britain didn’t like the fact he smoked cigars and loved drinking brandy. Churchill was a deeply flawed man, but God still raised him up to save Western civilization.

Churchill seemed to know this. Sandys makes the case that his famous great-grandfather felt a call from God his entire life that he was to save Western civilization. A case can be made, of course, that he did just that when he stopped Hitler from taking over Great Britain. In the face of Hitler’s military might, Churchill had to resolve to move ahead anyhow and to never quit. Churchill was a strong leader, and his example shows that God uses whomever He wants.

That’s what I see in Donald Trump and why people support him despite all the criticisms thrown at him. In that respect Trump resembles the indefatigable British prime minister, who often went against convention, decorum and his own party to badger the people of Great Britain into defending their country against Hitler’s Third Reich. Churchill was viciously attacked by the media in his day. Today, Donald Trump invites the same kinds of bitterness and resentment by raising alarms about the unraveling of American society at a time when our political elites, buttressed by the media, are denying that anything is wrong. Like Churchill, Trump is the target of opposition forces seeking to silence him for his bluntness and to stop him from speaking from the heart about problems the political establishment has been sweeping under the carpet for generations.

True leaders such as Churchill show strength of character in the face of adversity. Granted, Britain was in a life-and-death struggle with Nazi Germany, which threatened to destroy all of civilization. Forgive me if you consider this hyperbolic, but the situation today in America is almost as serious, considering the world we might have entered had Hillary Clinton won the election instead of Trump. It’s a world where we could have lost our constitutional protections to our religious freedoms. In this case our struggle wasn’t with guns, tanks and planes — it was a political battle over the presidency and the direction of our nation now and for generations.

Previous: Switzerland lights up Matterhorn mountain with U.S. flag in show of support
Next: ‘The English Game’ series tells history of English soccer