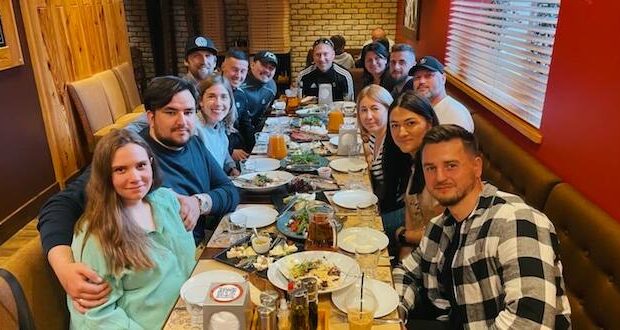 The Ukrainian staff gathered for a meal.

As Russia ramps up its relentless bombing of Ukrainian cities and towns, 30 Ukrainians who have been stranded in Kansas City for 10 months are going home.

They were in the United States for a Fellowship of Christian Athletes Conference when Russia invaded their home country, forcing them to quickly relocate to the Kansas City metro and temporarily work out of FCA’s office space.

“We at first had a two-week plan, then we converted it to a two-month plan,” FCA Chief Field Officer Dan Britton says. “And it was like, ‘OK God, it looks like longer than two months.’”

When the first missiles started falling in Ukraine in February 2022, Andriy Kravtsov, the FCA’s north global divisional vice president, was one of the visitors watching their homeland turn into a warzone. “You just can’t believe this is actually happening,” he said. “Is this a movie we’re watching?”

Since then, they have transitioned from refugees in spare bedrooms back to their mission work, even when it means bringing that work to their home country. Over the last 10 months, the Ukrainian visitors to the metro have moved from host family homes to their own apartments and houses, getting their own cars and setting up 15 sports camps in Ukraine during the war. That effort has given more than 4,000 children in a country under attack an opportunity to take their mind off the war, if even for just a little bit.

“The kids come to train and they don’t have to think about all that stuff,” said Kravtsov. “They just play and experience the joy.”

Upwards of 50 percent of Ukrainian children were turned into refugees and left the country for neighboring nations. Across Ukraine, there is virtually no village or city that has been left untouched by the war with thousands of war crimes committed by the Russians coming to light. They include the rape and execution of Ukrainian children.

Many of the Ukrainian schools they would normally serve are also gone or seriously damaged. Western authorities say over 2,000 Ukrainian schools have been destroyed by Russian bombing, including hundreds of high schools.

The plan is for the group to slowly start moving back to Ukraine or other parts of Europe to continue their work locally. Around February and March, a year after the war started, Kravtsov said his team will start the move. They will return home to a place that is drastically different from what they left.

“One of my friends who is fighting, he said, ‘Can you just show me normal life? Show me what normal life looks like,’” Kravtsov said.

If you would like to support efforts in Ukraine visit this page.