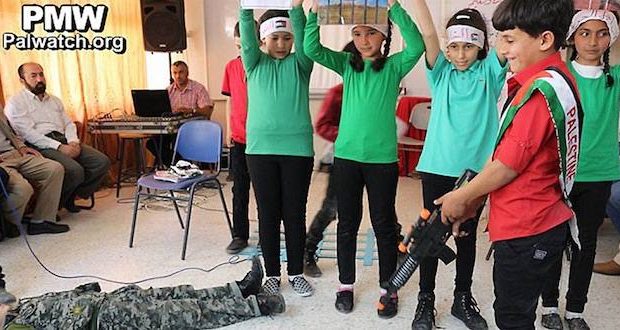 The United Nations voted on Friday to renew the mandate of the U.N. body that provides schools to Palestinian children.  Only the US and Israel voted against the resolution.  Both have exposed the agency and its anti-Israel incitement – including teaching terrorism to young children.

For 70 years, the United Nations Relief and Works Agency (UNRWA) has operated “refugee camps” for Arabs who left their homes when Israel was attacked by Arab countries. The facilities are not camps, but towns and cities and the “refugees” are not truly refugees yet are the only group of people in the world considered permanent refugees. The term even applies to Arabs who have permanently moved to other countries (including the U.S.) but who still claim modern Israel as their legitimate country.

But many say that far from simply providing humanitarian aid, those camps propagate hatred against Israel and have become breeding grounds for terror.

“We see the incitement, we see what they are doing in the camps. They are not helping the Palestinians,” said Danny Danon, Israel’s Ambassador to the UN.

Damon says that hatred remains strong due to shocking incitement found in Palestinian Authority school curriculum, that is also used in the UNRWA camps.

“Unfortunately today when a Palestinian child when he goes to the UNRWA school, he comes out hating Jews, incited, supporting Hamas. It shouldn’t be that funding from Western societies, Western democracies will support such curriculum,” Danon said.

Danon said Israel welcomed the US decision to stop funding to UNRWA more than a year ago.

“It is about time, to close, to shut down UNRWA,” he said.

Researcher David Bedein, founder of the Center for Near East Policy Research has studied Palestinian schoolbooks and UNRWA facilities for years.

He says while it’s not likely UNRWA will be shut down, donor nations should put conditions on their aid.

“Number one: take the schoolbooks away. We have schoolbooks here which honor murderers throughout the books and talk about dying for the right of return. This is wrong. This is not appropriate for a United Nations agency,” Bedein stated.

“Number two: give people the option to leave the camps. They can’t leave because they’re told by the PLO and by Hamas and UNRWA itself, you have to stay here under coercion. That has to stop.”

“Number three: there’s 1.2 billion dollars flowing into the UNRWA camps without any real oversite. This could be regulated if the donor nations get more involved more seriously,” Bedein added.

In 1978, Dalal al Mughrabi led a terror cell that killed 38 people including 13 children. 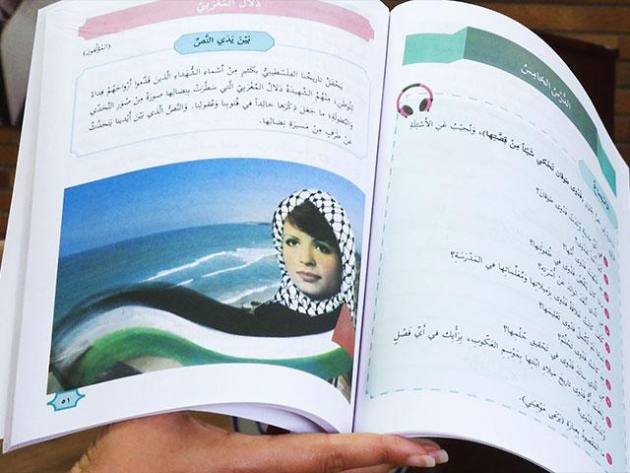 “Dalal Mughrabi as a role model for the children who are taught the concept in UNRWA schools of the right of return by force of arms. This is not appropriate for a United Nations school,” Bedein said.

The right of return refers to the Palestinian demand that the refugees from 1948 and millions of their descendants since then be allowed to return to their homes in pre-State Israel – most of which no longer exist.

In it are interviews with children and youth. A number of the children and a teacher all say they are from Malcha.

“My name is Razan Kuwar, and I am a refugee from the village of Malcha. Now I live in the camp but I hope to return to the village because I long for it and I have to see my land,” she said.

However, Malcha today is a busy Israeli residential and commercial area in Jerusalem – containing a hi-tech center, the city’s largest mall and sports stadium.

But the youth say they are ready to fight and take back all of Israel.

“There’s no two-state or one-state [peace] solution. There’s only one-state, and it will be Palestine forever. And what was taken by battle will be re-conquered through battle,” said Mohammed Muslah in the film.

“We must conquer our land by force. This land is our land. There is no way to divide it,” said Ahmed Ashraf Ismael also in the film.

When asked if peace possible here, he said, “Of course not – there will not be peace. There’s been a lot of martyrs, a lot of people wounded, and a lot of prisoners,” he said.

“We must wipe them out through battle. As it’s written in the Koran: like Salah a-Din [against the Crusaders],” he added.

Bedein said there’s not one message for peace in all the school curriculum.

“Israel no longer exists in schoolbooks. Every place where Jews live in Palestine including Israel is called an illegal Zionist settlement. Every place  –  not just West Bank, Gaza but also the entire country  –  every Jewish city is replaced with an Arab name. So the children grow up with the idea there is no Israel. There’s a Zionist entity that has to be ignored and/or wiped out and that’s United Nations schools.

Bedein believes the seeds of the next violent Palestinian uprising against Israel have already been planted in these camps and donor nations have a role to play in uprooting the violence.

Previous: So when does the new decade really begin?
Next: Jewish leaders celebrate defeat of anti-Semitic Jeremy Corbyn in U.K. election