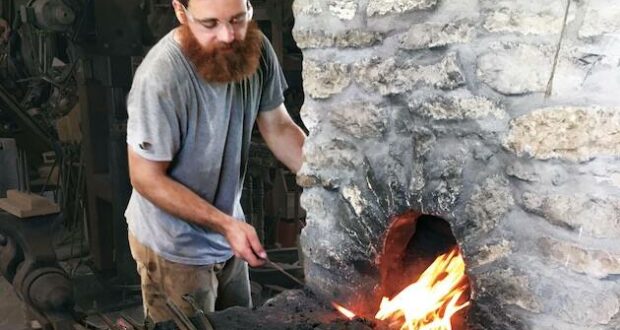 “When the coals start to dance.” Matthew Burnett teaches blacksmithing to a new generation

Matthew Burnett is on a mission to keep the skills of blacksmithing alive and share them with a new generation. He founded the Missouri Schools of Blacksmithing and Missouri School of Plain and Practical Living Skills in Cameron, Missouri and can’t keep up with the demand. In fact, he expects his father/son classes will be a hit this month.

But, while blacksmithing makes a comeback, its history is uniquely interesting.

As robots replace humans in many tasks, blacksmithing is akin to an endangered species. It didn’t happen overnight. There’s been a decline since the beginning of the Industrial Age when automation replaced the local blacksmith who made not only horseshoes but also pots and pans, utensils, axes, farm equipment, and just about everything made of metal that civilization depended on.

Blacksmithing in history and the Bible

Burnett says metalworking is one of the oldest and most important skills known to the development of civilization. Invented and mastered by the Hittites in what is now modern-day Syria, it began what is known as the Iron Age. The period is marked as a leap forward for humanity and the building of societies.

The importance of its mastery and use is also documented in the Bible. The Israelites, who had been given the land that would become Israel, were told by God that “…the mountain country shall be yours. Although it is wooded, you shall cut it down, and its farthest extent shall be yours; for you shall drive out the Canaanites, though they have iron chariots and are strong” states Joshua 17:18. 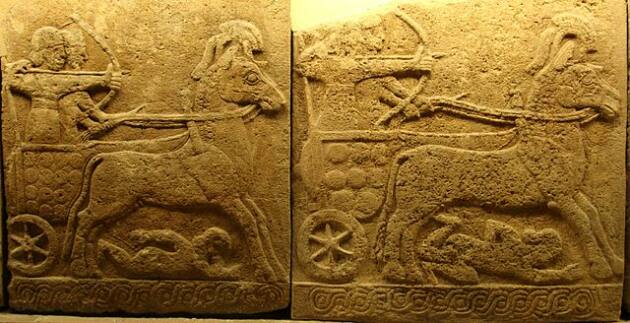 Canaanite Chariots made of iron.

The Canaanites were eventually defeated by Israel and the mastery of iron and blacksmithing skills spread to other civilizations. It’s seen as a pivotal moment for civilization.

Later, mastering fire and metal was seen by some in the Middle Ages as evil. Blacksmiths were even put to death for their “fiery craft.”

Fast-forward to today when the skill, thought to be dead, is seeing a resurgence of interest as thousands take it up. That’s due, in part, because of teachers like Burnett.

“Some are interested in it as a hobby for gifts for friends while others are making it a career,” says Burnett, who professional blacksmiths and architectural ironworkers make stairways, elaborate gates, whole city blocks of fence railing, and garden items. Others make knives and swords. “One guy makes beautiful custom Japanese swords,” he says.

Blacksmithing is also an exciting process, according to Burnett. “I like the sight, the sound, the coal smoke, heating up the steel and hammering it into shape,” he states. “Then sharing that knowledge with other people. That’s a sense of accomplishment I get from when students have made something themselves.”

He remembers the excitement he felt when he first saw the process in person when he was 13. It was watching the blacksmiths at the Kansas City Renaissance Festival in 2002. ” I was immediately intrigued by it, and that was the first step in a long and interesting journey.”

Now, twenty years later, with tremendous experience and a member of the Blacksmithing Association of Missouri, he’s teaching classes and is still drawn to the light of the hot coals.

“I still get excited when I see the coals start to dance in the air provided by the whirling of the blower; the flames shooting up through the hot coals, dissipating the smoke; and watching the metal take on the bright yellow glow of the fire,” he shares.

Many people have basic assumptions about blacksmithing that are usually more narrow than what it actually encompasses. “It’s a generational difference,” he says, pointing out that some think just knives and forks. “I like to show people the full spectrum. The different things you can make whether they be practical and utilitarian, or decorative.” 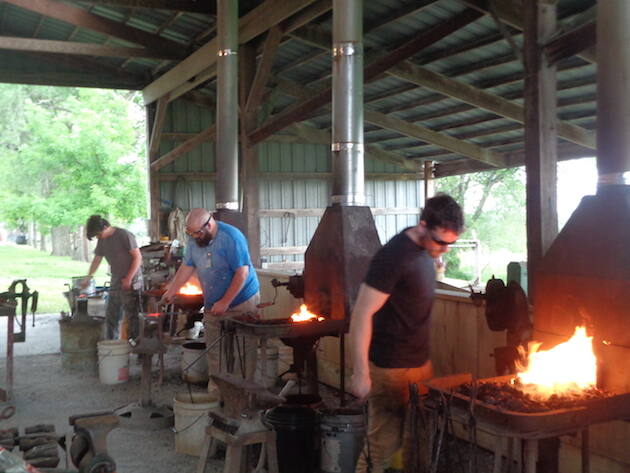 Burnett says his students are mostly drawn to classes because of how they’re organized and that they can come without any skill or knowledge. He believes that it is often better to come without any assumptions and discover it for yourself. 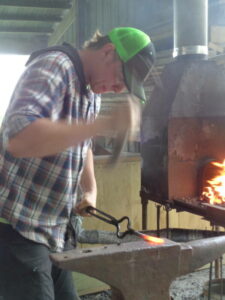 The classes, however, are filled with the inexperienced as well as those who have dabbled in it as a hobby. They all want to gain new skills and come from the Kansas City metro, Iowa, Nebraska, Arkansas and Kansas.

Since the beginning of the pandemic and a struggling economy, there has been a growing interest in self-sufficiency. And while people don’t expect they’ll be making a plow to support their family in a dystopian future, they want to feel empowered.

“People are interested in doing something practical and getting back to making something with their hands,” he says. “They want to get their hands dirty and make something rather than just buying it someplace. They find tremendous value in learning and doing it themselves.”

People who try it out find they enjoy it and are a bit surprised.

Both schools offer two semesters – Spring, which runs through June with a special weekend course for Father’s Day and then Fall which runs July through September. Many are one-day courses which students find very convenient. More advanced courses might be two days. 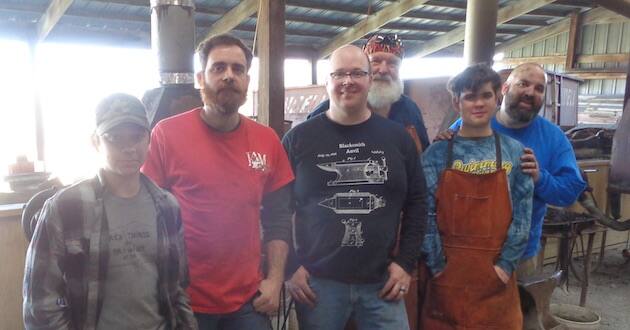 Father/son classes are popular each year around Father’s Day.

He says the classes are much better than those you might find online. “Videos are just pictures and audio but no hands-on aspect to it,” he says. “In-person classes, with expert instructors that really know their field, that’s what people need.”

The overall experience of getting in close and seeing what the teacher is showing and then doing it yourself is something that can’t be replicated unless you are in person. “There’s a tremendous amount of value in that. Something you can’t get by just watching videos.”

The next class revolves around Father’s Day and he says they regularly have 12 or more father-son participants. But, he says, women can also participate in the classes and find the experience rewarding. Those accompanying their fathers might be as young as 8 or 9 to their 20s and 30s. “They all have fun and share quality time while they learn a new skill,” he says.

As for Burnett, he’s excited to share what he knows with the public.

“I’m serving in the area I know God wants me to be. It took me a while to realize that but I found I had a talent for teaching and sharing. That’s why I opened the school,” he says confidently. “It has really been a blessing to find where I fit. I’m thankful for that.”

Previous: Yes, young adult, you can fly the American flag and be proud
Next: Formerly gay men and women share testimonies during Freedom March in Washington