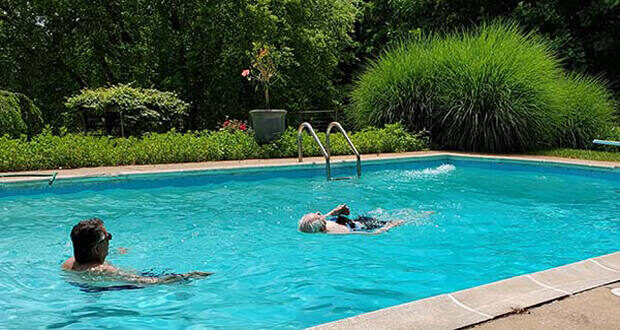 Swimming is one of the best forms of exercise you can do. Here are five reasons why you should be getting in the water if you want to get in shape and stay fit.

The most common New Year’s resolutions include becoming healthier and exercising more, but about 80 percent of these goals fall through by February, according to U.S. News & World Report.

Swimming might be the best way for these goal-setters to stay on their targets.

“The enjoyment in activity is extremely important in terms of continuing to engage in those activities,” says Hirofumi Tanaka, a professor in the University of Texas’s Department of Kinesiology and Health Education.

Tanaka points to a study of minimally to moderately obese young women done by Grant Gwinup and published in the American Journal of Sports Medicine in 1987. Participants reported that they enjoyed swimming much more than running and cycling.

Swimming is also the third-most-popular exercise, according to the most recent data available from the U.S. Census Bureau, meaning you’ll have someone to work out with.

Swimming’s Easy on Your Body

Let’s face it: Jumping into the pool at 6 a.m. each day might not be the most fun you’ll ever have. But the fact that you’re getting into water is actually one of the best parts of being a swimmer.

“In swimming, you are floating, so there are no joint forces,” says Tanaka, who bikes, runs, and swims. “The impact is much smaller than when you’re running.”

Swimming’s biggest benefits come later in life, when adults may be carrying a few extra pounds because of a slowed metabolism or less time to exercise because of the time demands of their job or family. The extra weight places more pressure on joints while exercising.

Tanaka adds that exercising in water also appears to be the best thing for people with arthritis.

“Every time you move, your joints, you experience those joint pains,” Tanaka says. “Swimming in a sense is an extremely good form of exercise for that.”

Swimming Can Slow Down the Aging Process

David Tanner was taken aback when he participated in his first Masters swim meet at age 29 in 1979. He hadn’t expected the older swimmers to be as boisterous as they were, but some relay teams were so excited that he thought they resembled swimmers less than half their age.

Tanner, who largely works with graduate students in Indiana University’s School of Public Health after swimming for Indiana from 1968–72, now knows that swimming actually helps make people younger—in a sense.

Tanner and Joel Stager, the director for the Counsilman Center for the Science of Swimming at Indiana, referenced a series of studies produced by Indiana graduate students that found Masters swimmers can have a biological age about 20 years younger than their chronological age if they swim at least an hour a day five times a week. But Stager said the studies are still ongoing.

“With intense training, you can maintain, but you have to be pretty serious about it,” Tanner says. “You can maintain up until the age of 70. After 70, time starts to weigh.”

You can find discussion of “runner’s high” easily, but what about “swimming high?” It may not be called that, but Tanaka has found evidence of swimming’s mental benefits.

Tanaka examined people who had stage 1 or stage 2 essential hypertension in a study published in August 1999 in the Japanese Journal of Physical Fitness and Sports Medicine. The participants completed a questionnaire designed to measure their mood, went through either a 10-week swimming program or didn’t exercise, and then took the questionnaire again.

Tanaka found that the participants who went through the swimming routine received a higher vigor-activity score, which “represents a mood of vigorousness, ebullience, and high energy, which are some of the central components of health-related quality of life,” Tanaka wrote.

His study also found the people who swam reduced their anger and fatigue scores from the first questionnaire to the second questionnaire by 34 percent and 28 percent, respectively.

All good reasons to take the plunge!

To find a Masters Swimming club in your area, go to The Club Finder.

U.S. Masters Swimming encourages adults to enjoy the health, fitness, and social benefits of swimming by providing more than 2,000 adult swimming programs and events across the country, including open water and pool competitions. USMS’s nearly 65,000 members range from age 18 to 99 and include swimmers of all ability levels. USMS, a nonprofit, also trains and certifies coaches and provides online workouts, a bimonthly member magazine, monthly newsletters, and technique articles and videos at usms.org.

Previous: Back to the Birthright Mission
Next: Associated Press adopts Democrat talking points on ‘court packing’