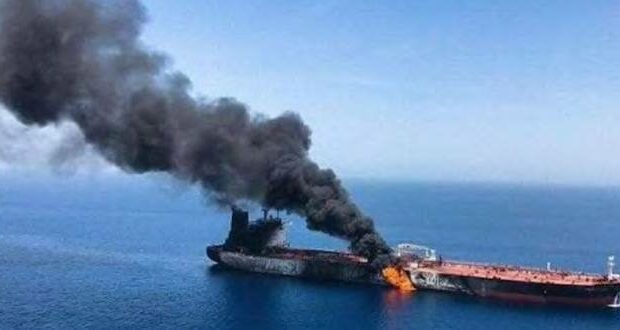 After a deadly attack on an Israeli ship, three world powers have given Israel the green light to attack Iran. The unusual unified response by the U.S., Russia and Britain comes days after the drone strike on Thursday.

The report, in Kuwait’s Al-Jarida, quoting unnamed Western intelligence sources, suggested that Israel might target Iranian vessels, the ship from which the drones were launched, or an Iranian port.

Officials in Washington and London said they held Iran responsible for the attack on Mercer Street, a ship owned by Israel tycoon Eyal Ofer. It was in the Gulf of Oman heading towards the United Arab Emirates when multiple suicide drones struck the ship’s bridge and living quarters.

The Romanian captain and a British security guard were killed. The Mercer Street was able to sail on its power to an undisclosed safe port, escorted by the U.S. Navy.

In a statement issued on Sunday, British Foreign Secretary Dominic Raab called the attack, “deliberate, targeted, and a clear violation of international law by Iran,” adding, “The UK is working with our international partners on a concerted response to this unacceptable attack.”

U.S. Secretary of State Antony Blinken said there was “no justification for this attack, which follows a pattern of attacks and other belligerent behavior.”

Iran denied responsibility for the strike on the Mercer Street.

Meanwhile, IDF Chief of Staff Lt. Gen. Aviv Kochavi spoke with his British counterpart gen. Sir Nick Carter on Sunday. According to unsourced reports in the Hebrew media, Kochavi and Carter agreed to share information and coordinate a response on Iran.

Over the course of 2021, Iran has attacked several Israeli ships in the Gulf of Oman. Israel is widely believed responsible for attacks on an Iranian intelligence-gathering ship in the Red Sea and the Iranian Navy’s largest vessel.

Israel is also said to have carried out attacks on Iranian ships carrying illicit weapons and oil to Syria in 2020.