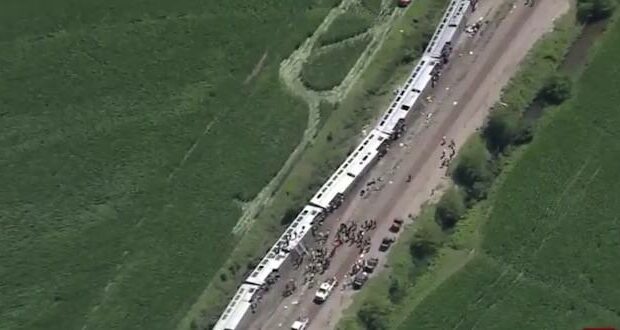 Authorities have now confirmed three people died in an Amtrak train derailment 100 miles northeast of Kansas City, Missouri. Dozens are injured and many remain in regional hospitals as of Tuesday.

Eight passenger cars and two locomotives jumped the tracks, overturned, and then seven slid on their side, after they hit a dump truck just after noon on Monday, according to officials.

Missouri State Highway Patrol Cpl. Justin Dunn said two of the train passengers were killed, along with someone who was in the dump truck.

The train was en route from Los Angeles to Chicago with 243 passengers and 12 crew members on board at the time of the crash, Amtrak said.

Dozens of people have been hospitalized. Officials at Hendrick Medical Center accepted seven patients from the scene, while officials at MU Health Care University Hospital/Columbia said its facility was treating 20 patients. Pershing Memorial Hospital received between 15 and 20 people from the accident.

Passenger Rob Nightingale, 58, told ABC News Live his car tipped to the side and he climbed through a window to escape. He said he saw a little girl crying and her family trying to comfort her. Nightingale said he saw some people covered in blood.

According to witnesses, sixteen Boy Scouts from Wisconsin traveling on the train jumped into action after the derailment, helping administer first aid to those hurt.

“They were helping and mobilized people on backboards and getting them out safely,” Dan Skrypczak, a parent of one of the Boy Scouts, told local media.

The National Transportation Safety Board said it is launching a 14-member go-team to investigate the crash. The team is scheduled to arrive Tuesday.

Mendon is about 100 miles northeast of Kansas City, Missouri.

This comes one day after an Amtrak train collided with a car in California, killing three people.
Missouri Gov. Mike Parson said at an appearance Monday afternoon that officials were closely monitoring the situation, according to NPR member station KCUR.

“Anytime you have a derailment of a train and multiple cars, it’s not a good day. So, you know, right now our thoughts and prayers are with the people that were on that train, the family, the rescue people.”

Previous: These companies will pay employees for abortion expenses
Next: What is Missouri’s new pro-life ‘trigger law?’