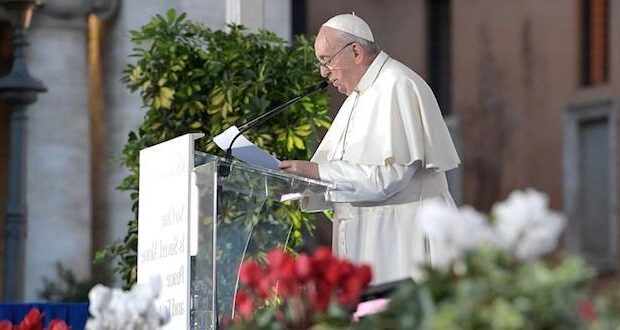 “Homosexuals have a right to be a part of the family,” the pope said in a documentary. “They’re children of God and have a right to a family. Nobody should be thrown out or be made miserable because of it. What we have to create is a civil union law. That way they are legally covered.”

The Catholic News Agency said the pope’s comments were not about same-sex marriage but instead about a legal recognition short of marriage that would grant benefits of marriage.

J.D. Greear, president of the Southern Baptist Convention and pastor of the Summit Church in North Carolina, urged Christians to look to the Bible for answers. “No matter what a pope, pastor or elected official says, we do not get to define sexuality or the family — the creator does, and on this, his word could not be clearer,” Greear said.

“As Southern Baptists, our authority on sexuality and marriage is the Bible — the living word of God,” Floyd said. “Our authority does not come from a man or a group of men and women, but from the Bible alone. When the Bible speaks, God speaks. The Bible teaches marriage is the uniting of one man and one woman in covenant commitment for a lifetime.

“Other faiths may choose other authorities to determine their beliefs on marriage, family, sexuality and other matters of life. However, as Baptists we believe the Bible has God for its author, salvation for its end and truth, without any mixture of error, for its matter. Therefore, all Scripture is totally true and trustworthy. We need not add anything to the Bible about marriage, family, sexuality or anything else because the Bible is God’s perfect treasure of divine instruction.”

The Catholic News Agency said Pope Francis’ remarks “did not deny or call into question any doctrinal truth that Catholics must hold or believe.”

“In fact, the pope has frequently affirmed the Church’s doctrinal teaching regarding marriage,” it said “Pope Francis’ statements do not constitute formal papal teaching. While the pope’s affirmation of the dignity of all people and his call for respect of all people are rooted in Catholic teaching, Catholics are not obliged to support a legislative or policy position because of the pope’s comments in a documentary.”

Previous: Secretary Ben Carson launches new federal effort with faith groups to end homelessness
Next: I am a free black woman. Why I won’t vote Democrat this year