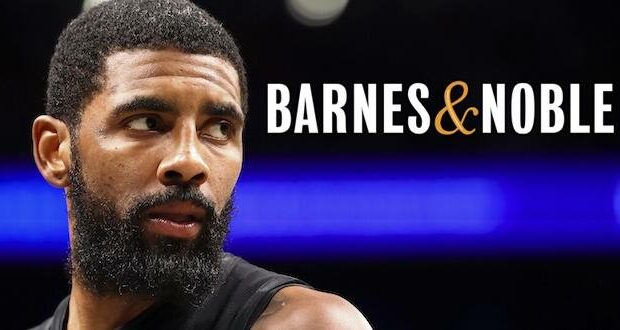 Comedian Dave Chappelle on Saturday Night Live defended NBA star Kyrie Irving who had tweeted support of a vile antisemitic book that resulted in his suspension from the NBA. Now, the book series that prompted the suspension has been removed from the online store of Barnes & Noble.

A search for the book series, “Hebrews to Negroes: Wake Up Black America,” yielded zero results on Tuesday, despite having been ranked number 69 on the book retailer’s 100 bestseller list just a week earlier.

The series, which was later made into a controversial documentary, promotes the hate-filled and notorious antisemitic conspiracy theory peddled by Black extremists and even some white supremacists that “white Jews” are imposters who hijacked black people’s heritage.

The book lists the extermination of the 6 million Jews murdered by the Nazis during the Holocaust as one of the “five major falsehoods,” spread by the Jews. It also accuses Jews of falsifying the history of the Holocaust in order to “conceal their nature and protect their status and power.”

More than 200 Hollywood celebrities, including Mila Kunis, Mayim Bialik, and David Draiman, signed an open letter on Friday calling on Amazon and Barnes & Noble to remove the title from their platforms.

The notion that black people are the real Jews recently arose again after rapper Kanye West claimed he said that he “actually can’t be antisemitic because black people are actually Jew [sic] also.”

Among other lies and falsifications, the book features the following fake quote widely attributed to Hitler: “Because the white Jews knows that the Negroes are the real Children of Israel and to keep Americas secret the Jews will blackmail America. They will extort America, their plan for world domination won’t work if the Negroes know who they were.”

That quote and others have been repeated by other notorious antisemites, including Eagles player DeSean Jackson and Nation of Islam leader Louis Farrakhan. According to CNN, Kanye West also secretly admires Hitler, and was even planning to name his 2018 after the fascist leader.

The International Legal Forum, a global coalition of lawyers, called on both Barnes & Noble and Amazon CEO Jeff Bezos to immediately remove the book and film from distribution, calling it a “sickening” piece of propaganda full of “racial hatred, malicious falsehoods and dangerous incitement.”

The book and movie give “voice to and amplifies a host of other common and long-standing antisemitic tropes and conspiracy theories about Jewish power, greed and control,” the group’s CEO, Arsen Ostrovsky says.

The work “is no different to the notorious antisemitic conspiracy manual ‘The Protocols of the Elders of Zion’, just adapted for modern consumption and made even more toxic by virtue of social media glorification,” he said.

Noting new records of antsemitic incidents across the U.S., Ostrovsky said there “can be zero tolerance for the promulgation of such hatred, incitement and antisemitism.”

“Amazon is a company that prides itself on being a responsible leader in the global community. One of your key leadership goals even acknowledges ‘We must be humble and thoughtful about even the secondary effects of our actions,’” he said, adding that the company removed dozens of items from distribution containing Nazi propaganda and antisemitic material.

The Nets suspended Kyrie Irving for at least five games without pay last Thursday, after he continued to refuse to “unequivocally say he has no antisemitic beliefs.”

The Nets said that Irving is “currently unfit to be associated with the Brooklyn Nets.”

NBA Commissioner Adam Silver said, “I am disappointed that he has not offered an unqualified apology and more specifically denounced the vile and harmful content contained in the film he chose to publicize.”