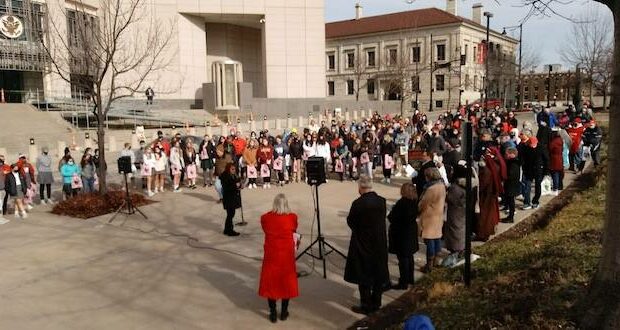 The community came together for a pro-life rally across from the federal building. Photo: Nola Wood.

Over 75 people from both sides of the state line gathered at Ilus Davis Plaza across from the Federal Court House to sing, hear speeches on the value of life, and pray. The Annual Pray Vigil for Missouri Right to Life called attendees to action, a message that found receptive ears.

Linda Verhulst, a board member with Missouri Right to Life – Western Region, urged the crowd to follow their hearts and to change hearts.

“I urge you to go out and change someone’s heart. Share the message of life with conviction and compassion, love and logic, truth and tenacity,” Verhulst stated, impassioned. “It is through transformed hearts that we will create a truly pro-life America.”

Many of those present expressed shock at the announcement that Biden had revoked the Mexico City Policy. His executive order diverts taxpayer funds from organizations that do not perform abortions to those that promote and perform abortions such as Planned Parenthood.

Biden’s actions were one of several that overturned pro-life policies put in place by the Trump administration.

But even as Biden’s actions were announced, hope was also displayed.

Student groups from St. Michael the Archangel Catholic High School in Lee’s Summit and St Pius X High School in Kansas City attended the rally. Speakers encouraged the young people to use their talents to be the generation to end abortion. One attendee said that they will be the generation because “science is on their side.” Previous generations could not say specifically when life began.

Speakers at the rally represented numerous denominations and organizations. And so did the attendees. When asked why she attended, Alice Goergen shared with Metro Voice that she came “to let people know I support life from conception to the end.”

Speakers also addressed that we live in a culture that drowns out supporters of life. Included were numerous groups that support women and including 40 Days for Life, Black Americans for Life, Gabriel Project Rachel’s Vineyard, Respect Life-Diocese of KC/SJ, and Metro Voice News

That message of life is being spread through education and reaching young people through social media.

Missouri Right to Life states its mission is educate citizens about pro-life issues and pass legislation that promotes and defends the sanctity of innocent human life from the inception of biological development through natural death. MRL regularly organizes and promotes “effective witness” among its members across the region. The group also maintains a political action committee dedicated to electing pro-life representatives who then work to pass pro-life laws.

Another purpose of the Prayer Virgil is to stand in unity with the National March for Life in Washington, DC. Because of Covid, and in an attempt to ease security concerns for public safety officers, this year the march was held virtually.

Attendees agreed that the new Biden administration is hostile to the pro-life movement.

Bill Francis, Director of the Respect Life & Human Rights Offices of the Diocese of KC/SJ, urged those involved in the movement to “Stay sharp. Bear witness to the truth. We need to play offense.”

Previous: Kansas Senate approves ‘Value Them Both’ pro-life ballot measure
Next: ‘God is my strength’: The faith of Hank Aaron