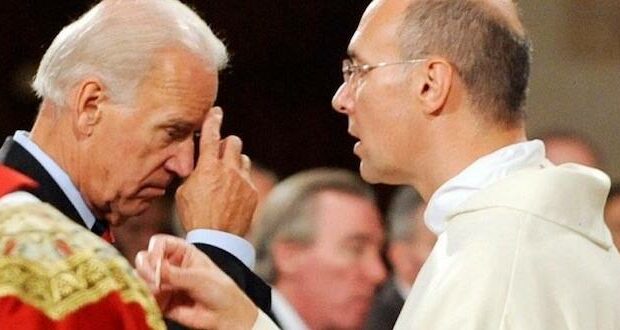 The U.S. Conference of Catholic Bishops will meet his week to discuss whether President Biden will be allowed to receive communion while promoting abortion until birth and forcing colleges to allow biological males into girls’ showers

The President has previously been denied communion over his views on abortion.

The bishops, who will meet virtually from Wednesday to Friday, will determine whether to ask the Committee on Doctrine to draft a teaching document on the topic of communion. If the document is commissioned, it can be a strong symbolic rebuke of individuals with views contrary to Catholic teaching on life, gender and marriag. The bishops would then proceed to review an amendable draft in their fall meeting.

In 2004, the conference issued a statement that said individual bishops could determine whether to deny communion to pro-abortion Catholic politicians. According to the Catechism of the Catholic Church, direct abortion or willful is “gravely contrary to the moral law,” and marriage should be between a man and a woman as the Bible outlines, not members of the same sex.

Biden, who considers himself Catholic, has caused deep concern among church leaders because of his support for abortion on demand, including up to the moment of birth, and same-sex marriage. After taking office in January, Biden lifted federal restrictions on abortion pills to increase accessibility, restored funding to Planned Parenthood and began fighting state laws that are banning abortion of babies with Down syndrome. The president also cut off a long-standing ban on federal funding for abortion in his 2022 budget and restored taxpayer-funded overseas abortions.

The nation’s media industry seems fascinated with Biden and his faith and often conflates faith with religious observance.  USA Today recently wrote “Unlike Trump, Biden regularly attends church. His Catholicism has played as large a role in his life as his outsized family Bible did at his inauguration. Biden wears his son’s rosary beads, made the sign of the cross when paying his respects to fallen Capitol Police officer Brian Sicknick Tuesday, and quotes Bible passages.”

But if religion is meant to be what other people observe in you and not what’s in your heart, then Biden may fit the bill according to one Catholic professor.

That apparent disconnect in Biden’s outward display of religion and policy directives has disturbed many.

In February, Sycamore Trust, an alumni group from the University of Notre Dame, wrote to the university’s president urging that Biden should not speak at the university’s commencement because of his radical pro-abortion and anti-Biblical same-sex marriage stances.

The school has held to a recent tradition of having presidents speak at commencement. Biden, however, ultimately turned down the speaking invitation because of a what a press release said was a “scheduling conflict.”

A Gallup poll conducted in March found that 55 percent of Republican Catholics said that Biden should be denied Communion.

It is not known when the bishops will make their decision on Biden public.