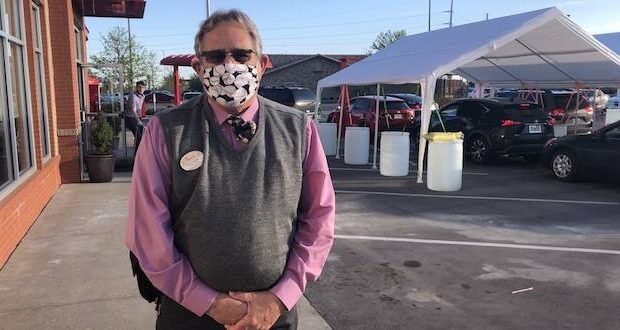 Kevin Holman is the director of people at the Chick-fil-A in Lee's Summit, Mo. Photo: Metro Voice

Chick-fil-A sales and donations surge in response to coronavirus

A Chick-fil-A restaurant is finding that serving others during the coronavirus outbreak is not just the right thing to do – it also is good for business.

“With nice days like today, we’re over last year,” Kevin Holman, director of people for the Lee’s Summit, Mo. location, told Metro Voice last week. He explained that with their dining room closed, “curbside pickup is temporarily replacing the dining room. You can come, park, tell us your space and we bring the food to you.”

Holman, who describes his role as “coaching, mentoring and personnel,” often can be seen huddled around a table with employees to train and encourage them or even on a ladder putting up seasonal themed or promotional signage for the Lee’s Summit location. The city of 100,000 people is a suburb of Kansas City. 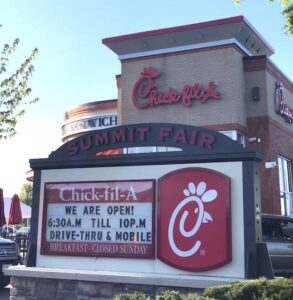 With restaurant dining rooms closed in most states because of the coronavirus shut-down, Chick-fil-A is continuing to lead the fast food industry in drive-through, curbside and mobile delivery services. Before the Covid-19 pandemic, Chick-fil-A led McDonald’s and all fast-food competitors in per-restaurant sales. What is even more remarkable is that in the midst of the Covid-19 crisis, many of Chick-fil A’s more than 2,300 restaurants are now reporting sales ahead of last year, even with their dining rooms closed.

Other Kansas City-area franchise restaurants of national fast-food chains such as McDonald’s, Burger King, Wendy’s, Sonic, Chipotle, Panda Express and Five Guys, all told metrovoicenews.com that their drive-through, carry-out and delivery traffic is up dramatically during the Covid-19 outbreak. Some have reported that some single-day sales have surpassed previous days when their dining rooms were open.

As we interviewed Holman outside the restaurant next to two drive-through lanes of vehicles dozens of automobiles deep – yet moving remarkably fast – he was preparing to deliver 100 donated meals to health-care workers at Truman Medical Center. This has become routine for his restaurant during the Covid-19 outbreak.

“Our franchise is giving a hundred sandwiches a day away to nursing homes, hospitals, health-care facilities, and police and fire agencies,” he said

Fellowship Church in Raymore, Woods Chapel United Methodist Church, Martin Luther Lutheran Church and Abundant Life Church, all of which feed the needy through their food pantries, also will receive donations of 100 sandwiches. John Knox Village, Lee’s Summit Social Services and Coldwater – all well-known non-profits in Lee’s Summit – also have received or will be receiving substantial food donations from the restaurant in the coming days, according to Holman.

As the farthest south Chick-fil-A location in the Jackson and Cass County corridor, Holman said they deliver to the Lee’s Summit, Grandview, Belton and Raymore police departments, as well as hospitals as far south as Belton and Harrisonville.

On April 20, Chick-fil-A, based in Atlanta, announced a $10.8 million Covid-19 Community Relief Effort. In making the announcement, Dan Cathy, Chick-fil-A Chairman and CEO, said, “striving to be supportive, caring and generous to our neighbors is in our DNA. Our restaurant operators give back locally in so many ways, and this time is no exception.”

In commending the example that the Lee’s Summit Chick-fil-A franchise and others model during the coronavirus outbreak, Cathy added “I’m humbled by the incredible care our restaurant team members have shown – from offering free meals to health care workers to feeding school children in need.”

Many large companies often donate millions to national non-profits that have high overheads, meaning less funding goes to those they serve. In contrast, Chick-fil-A has committed to distribute the $10.8 million they earmarked through June to their network of more than 1,800 independent owner-operators. They will, in turn, steward those funds to “have an immediate impact on the needs of local communities, including food donations or items to first responders, health-care workers, Chick-fil-A team members and their families,” according to a release from the Chick-fil-A corporate office.

When commenting on the multi-million dollar initiative, Holman told Metro Voice that “Chick-fil-A’s expectation is for the local franchisee to be involved in their community. That’s why franchisees don’t have ten, twenty or thirty Chick-fil-A’s. They have one, maybe two, because they want that community involvement.”

During our site visit to Chick-fil-A in Lee’s Summit on April 23, the efficiency with which multiple team members served two drive-through lines of automobiles dozens deep, was like nothing seen at drive-throughs of other restaurants that often are lamented for slow moving lines. 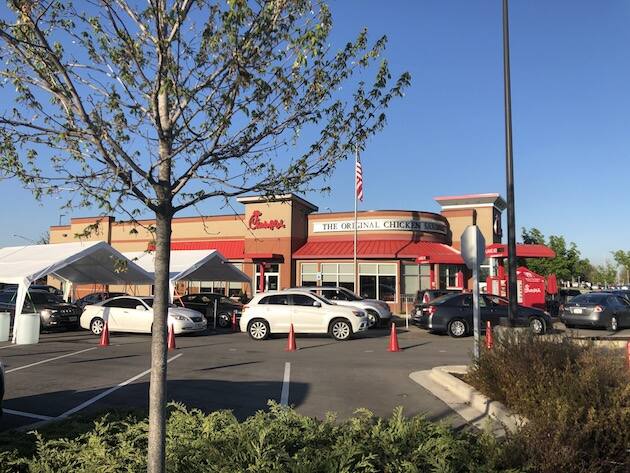 Team members, toting mobile-ordering devices, greeted motorists under tents in the two lines to take orders before they reached the microphone ordering kiosk. More team members were staged at the drive-up windows, both inside and outside the restaurant building. Another team member was staged under a tent at the drive-through exit, stocked with additional condiments and other supplies to confirm if customers needed anything else before leaving.

Along with the speedy, dual-lane drive-up service, Holman noted that their curbside service has seen a huge increase in demand with their dining room temporarily closed. On the day Metro Voice visited for this story, more than a dozen drivers were parked awaiting curbside service with team members quickly shuttling food to them.

Chick-fil-A has long been known for its high quality of food, clean dining rooms and restrooms, and unmatched friendliness and customer services of their team members. Their response during the coronavirus outbreak is taking their game to an even higher level.

Six months after weathering a storm of criticism from liberal groups and media outlets for their historic support of Christian-based non-profits that uphold traditional family values and Biblical positions, Chick-fil-A has emerged from that controversy stronger than ever.

Chick-fil-A has shifted most of its charitable effort to supporting local non-profits that serve the poor and needy in the communities in which their restaurants are located, as well as police, fire, rescue and frontline health-care workers. It’s a restauranteering recipe of customer service and community outreach that has helped make Chick-fil-A the most successful fast-food chain in America.

Previous: From the Lincoln Highway to a Scottish revival: Five free documentaries on Youtube
Next: ‘The Chosen’ streaming series on Jesus surges in popularity