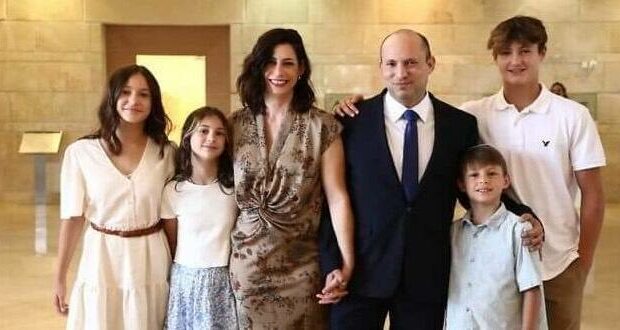 Naftali Bennett with Gilat Bennett and their children.

Christian leaders from around the world are sizing up Naftali Bennett, the new prime minister of Israel. They’ve sent him a letter committing to prayer and encouragement as he takes on the leadership role.

Bennet was able to cobble together a coalition of eight parties that ousted Benjamin Netanyahu who served 12 straight years and regularly thanked Christians for their support of Israel.

While Netanyahu appreciated the close relationship between American Christians, particularly evangelicals, Bennett may take it to a whole new level. The new leader is actually the first practicing Jew to hold the office. In addition to being orthodox, he is the first to have American parents.

More than 80 Christian leaders from around the world have expressed their support in a letter sent to Bennett.

“We want to thank you in advance for protecting our shared values as they apply to Israel’s citizens, whether Jews, Christians, Muslims, or Druze; for guarding the holy sites and welcoming religious pilgrims from around the world to discover the birthplace of their faith; for defending Israel from outside aggression; and for continuing to work toward peace with Israel’s neighbors,” the letter stated. “In return, we pledge to deepen our friendship with your country and its wonderful people.”

READ: Who is Naftali Bennett?

It went on to say: “For many centuries, the Jewish people did not have friends; indeed, Christians were often counted among their greatest enemies. But today the situation is different…Christians in North and South America, Europe, Africa, and Asia are united in their love for – and strong defense of – a sovereign Jewish state with Jerusalem as its capital.”

According to The Jerusalem Post, the letter is signed by Christian leaders of multiple denominations, including Protestant, Catholic and Orthodox believers from around the globe. In total, the signers represent half a billion believers in churches and Christian organizations.

Those who signed include officials from National Religious Broadcasters, The King’s College, International Christian Embassy in Jerusalem, American’s National Prayer Committee, Christians United for Israel, The Congress of Christian Leaders and more.

The leaders wrote that what unites them is their “love for – and strong defense of – a sovereign Jewish state with Jerusalem as its capital.”

They also told encouraged the new prime minister saying they will pray to God that He “grants you wisdom and strength as you make hard decisions that will affect the lives of millions, and we trust that He will answer those prayers.”

“Benjamin Netanyahu has been a personal friend of mine for many years, and I’m not sure the people of Israel fully appreciate his statecraft that has led to unprecedented peace, prosperity and security not just for Israel, but for the entire Middle East,” former Arkansas Gov. Mike Huckabee said. “It will take years for the new leadership to develop the depth of relationships that Netanyahu had fostered over his 12 consecutive years and 15 total. Having said that, Israel is where it is because of God, not any one man or political party.”

Huckabee said he has known Bennett for more than a decade and has “high hopes that he will use his very significant executive skills to keep Israel stable and secure.”

“The major concern with a coalition that covers the entire spectrum of left to right is whether there can be consensus without capitulation on critical issues such as sovereignty in Judea and Samaria and building on the Abraham Accords,” he said. “I hope all my Christian friends will join me as we ‘pray for the peace of Jerusalem.'”

Nikki Haley, former U.S. ambassador to the United Nations and practicing Christian, is visiting Israel with Christians United for Israel founder and pastor John Hagee to express solidarity for Israel and meet with the new prime minister and other Israeli leaders.

The letter was spearheaded by the Philos Project, a non-profit based in New York City that seeks to promote Christian engagement in the Middle East.

The organization’s president, Robert Nicholson says that there is “confusion” as to why Christians care about Israel and the Jews.

“The letter points out the source of this connection,” he explained, which is “shared values and particularly the values that come out of the Hebrew Bible.

“There is a feeling of kinship between Christians and the people who wrote the Book we all read,” Nicholson told the Post.

The new prime minister has already spoken about his gratitude towards Christian support of the country and her people.