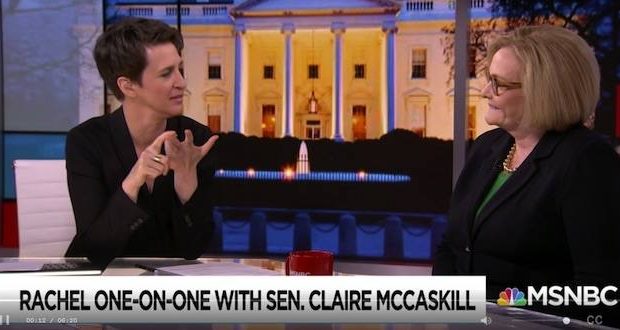 Claire McCaskill may no longer be Missouri’s U.S. Senator but it hasn’t stopped her from attacking Republicans.

She typically tweets her obscenities, such as this week when she tweeted “Eff them!” to Republicans who voted to replace Liz Cheney as chair. But it was on cable when the subject of abortion came up.

On Monday, she said on MSNBC’s “Deadline” that the Republican goal of making abortion illegal by electing presidents who appoint conservative Supreme Court justices will not be complete until “a rape victim is put in prison for taking the morning-after pill.”

Anchor Nicolle Wallace said, “All eyes on the dramatically altered makeup of the United States Supreme Court as the court announced it will take up Mississippi’s restrictive abortion law. The law has been struck down by lower courts who claim it is plainly unconstitutional. But the 6-3 conservative majority on the Supreme Court is made up of three justices picked by an ex-president who explicitly said his qualification for making those selections was his opposition to Roe v. Wade.

“The Mississippi law is viewed by abortion rights advocates as a clear assault on protections for women’s freedoms. Nancy Northup, the president of Center for Reproductive Rights, saying in a searing statement today, ‘Alarm bells are ringing loudly about the threat to reproductive rights. The Supreme Court just agreed to review an abortion ban that unquestionably violates nearly 50 years of Supreme Court precedent and is a test case to overturn Roe v. Wade.’

“The Mississippi law under review described as pure gaslighting by a U.S. district judge who struck it down as unconstitutional. Legal scholars say the very decision to take up the case in many ways speaks volumes about the focus of the conservative-dominated court.”

McCaskill said, “Yeah, this may end up being the situation that is often described as the dog catching the bus. And what happens in America in terms of the political climate if, in fact, this court overturns decades of precedent and fails to protect women’s reproductive freedoms via this Mississippi case.”

She added, “I got to tell you, Nicolle, I don’t think younger voters remember what it was like before Roe v. Wade. I don’t think they realize these folks will not be happy until a rape victim is put in prison for taking the morning-after pill. That’s the road they are going down. That’s the road they’ve been trying to go down for a long time even though they are really pushing provisions that are widely rejected by the vast majority of Americans.”

McCaskill and the other Democrat guests may have been intentionally misleading viewers. The Mississppi law taken up by the Supreme Court has nothing to do with the morning after pill. The justices will specifically weigh whether all pre-viability prohibitions on elective abortions are unconstitutional, according to an order issued Monday. The high court’s abortion cases have established a woman has a right to an abortion before fetal viability, which generally occurs around 24 weeks into a pregnancy. The morning after pill is generally taken within 72 hours of sex.

McCaskill has been busy with Twitter this in recent days and not just about abortion.

This week McCaskill tweeted that the only qualification to run for Senate in Missouri was to be able to “wave a gun at black people.”

McCaskill, who earns a sizeable sum from MSNBC, was one of the most ardent supporters of abortion in the Senate. The Senator, who lost a landslide election to Republican Josh Hawley in 2028, voted against Supreme Court nominee Neil Gorsuch and for taxpayer-funded abortions.