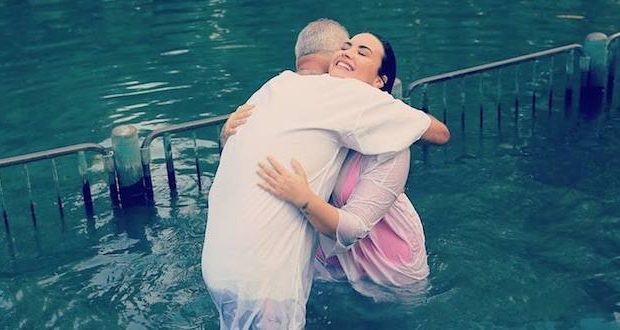 Lovato being baptised in the Jordan River.

Who can pass up a chance to visit the places mentioned in the Bible? When the opportunity arose for singer and actress Demi Lovato to visit Israel she said yes to what she described as an “amazing opportunity.”

On Tuesday Lovato shared that she was baptized in the Jordan River at “the same place Jesus was baptized.”

Lovato, who has described herself as a Christian with Jewish ancestry, is just one of many well-known Hollywood A-listers and sports figures who has visited Israel in recent months.

“There is something absolutely magical about Israel. I’ve never felt such a sense of spirituality or connection to God…something I’ve been missing for a few years now,” she wrote in a viral Intagram that garnered over 2.5 million likes. “Spirituality is so important to me…to be baptized in the Jordan river…I’ve never felt more renewed in my life.”

READ: Visitng Israel as a family: the how-to

The singer shared that she had been missing a connection to God “for some years now” but that on her pilgrimage, she felt that connection renewed.

“This trip has been so important for my well-being, my heart, and my soul,” she added. “I’m grateful for the memories made and the opportunity to be able to fill the God-sized hole in my heart. Thank you for having me, Israel.”

The trip, and resulting spiritual reconnection, follows a tough few years for the young woman. On July 24, 2018, the singer was rushed to the hospital from her home in Los Angeles after an apparent drug overdose. Two weeks later, Demi checked into rehab following her hospitalization. Earlier this year marked her one year since her overdose, and since then, she’s shown her fans that she’s prioritizing herself. The actress made a deliberate decision to only surround herself with close family and trusted friends, eschewing the Hollywood practice of traveling with an entourage and flashing bling.

That decision  has, say many observers, resulted in real change both physically, emotionally and spiritually as the actress began focusing on what was important in her life. A trip to the Holy Land in Israel became a priority in her journey, as it is with millions.

Impact of the Holocaust’s reality

As with all visits to Israel, the truth of the Holocaust is inescapable. The 27-year-old singer shared a photo of her visit to  Yad Vashem, the World Holocaust Center in Jerusalem that chronicles the lives of the six million–plus Jewish lives exterminated at the hands of Nazis and others before and during World War II.

My heart was absolutely broken in Yad Vashem. This was such a beautiful tribute and a reminder that we can never forget.

“My heart was absolutely broken in Yad Vashem. This was such a beautiful tribute and a reminder that we can never forget,” she wrote in a separate post, sharing several photos from the memorial.

Looking at her photos, one can see the trip was also an altruistic effort. During her time she visited the Shalva National Center, posting a photo on Instagram of herself with a “little beauty.”

The Israel Association for the Care and Inclusion of Persons with Disabilities is, according to their website, “dedicated to providing transformative care for individuals with disabilities, empowering their families and promoting social inclusion.” Further, the center provides services for thousands of people with disabilities from infancy to adulthood and their families.

Speaking of the children with special needs, she wrote she “fell in love” with one of the little girls there.

While Lovato turned off comments on her baptism photo, Muslims, anti-Semitic individuals and proponents of BDS left hateful and pro-Palestinian messages on her other Instagram posts. BDS is the movement to destroy Israel’s economy by forcing companies, universities and states to boycott any business, educational or philanthropic dealing with the country.

“Are you kidding me? Palestine literally exists,” one user wrote, adding, “Free Palestine,” while ignoring the fact that Palestine had never been a country and was merely a nickname given to conquered Israel under the Romans.

“There’s a lot of injured Palestinian children they was attacked by the Israeli Occupation Army, hope you’ll visit them next time,” another user added without providing facts.

Other users managed to call Lovato a racist and posted “free Palestine,” and the flag of the Palestinian Liberation Army which was responsible for the mass murder of Israeli athletes at the Munich Olympics.

Lovato has has taken the high road and refused to respond to the hate-filled comments. For her, the spiritual renewal that took place in Israel transcends those that wish to destroy it.