Home / News / Columns / Math and Music: Why Do I Have To Learn This? 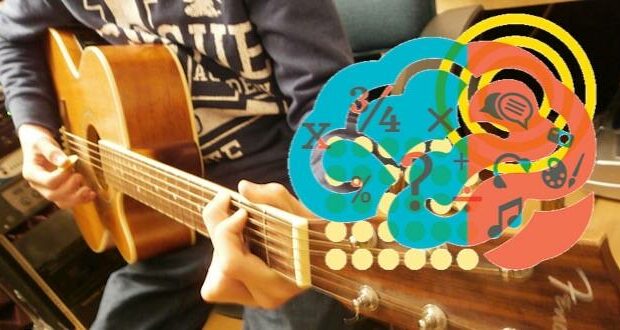 Math and Music: Why Do I Have To Learn This?

“Why do I have to learn this? I’m NEVER going to use it.” It is likely that you have heard this (or even said it yourself) many times.

Students question the usefulness of a litany of concepts and subject matters, often those they find most difficult.

For adults, the memorization of and completion of schoolwork was a “given.” We may not have enjoyed it, but we did it. We memorized multiplication tables, learned to recite long Scriptural or literary passages, learned how to spell properly, and understood the value of proper sentence structure and writing well. 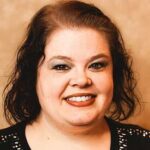 Lessons learned in school far transcend the simple mundane tasks of reading, writing, and arithmetic. Subjects such as mathematics and music, particularly at the critical pre-adolescent ages, stimulate physical brain growth that fosters problem-solving, comprehension and interpretation of stimuli, flexibility of thinking, planning and strategizing—all of which are critical components of organizational success, wise decision making, and positive life choices.

So, encourage your students to endure when things are difficult. Instead of simply giving them the answer they seek, challenge them to think critically about things. Teach them to ask questions. Require continual practice and diligence in study, memorization, accomplishment. They may not enjoy it now, but they will thank you for it later.

For those who are interested, I have included some of the scientific explanations for diligently cultivating musical and mathematical skills. These subjects, in particular, stimulate neuroplasticity, which further aids in critical thinking skills applicable to all areas of life.

With the increasing ubiquity of technology, students are becoming less inclined and perhaps even less capable of accomplishing these things. This may sound like a harsh statement, but hear me out. According to Barbara Helmrich, the brain experiences synaptogenesis, or a surge in the formation of new synapses, during early adolescence.

According to additional studies, this surge typically peaks between the ages of 10 and 12 in the prefrontal cortex and the parietal lobe. A decrease in cortical grey matter follows this synaptogenesis post-adolescence. Cortical grey matter throughout the nervous system “enables individuals to control movement, memory, and emotions. Different areas of the brain are responsible for various functions, and grey matter plays a significant role in all aspects of human life,” according to the National Center for Biotechnology Information (NCBI). 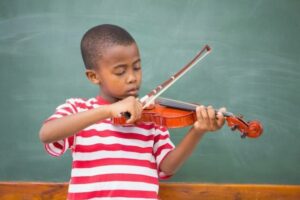 This decrease in grey matter is heavily influenced by activities in which the individual participates. Activities such as musical and mathematical processing stimulate these synapses in the prefrontal cortex and parietal lobe. Therefore, according to Helmrich the practice of music and mathematical processing strengthens the same neural connections.

Formal musical instruction has been theorized to enhance even the physical structure of the brain (Helmrich, 2010). According to another study, early musical training alters the formation of the corpus callosum, whose primary role is interhemispheric integration and communication. Myelination, a process in which fatty sheaths surrounding neuronal processes and fibers are increased, further aids in the efficiency of electrical transmission between various portions of the brain.

Because the corpus callosum is one of the final areas of the brain to undergo myelination, musical and mathematical instruction may enhance its development during synaptogenesis.

Furthermore, in a 2003 study, gray matter volume differences in motor, auditory, and visual-spatial brain regions were indicated, theoretically, in response to “long-term skill acquisition and repetitive rehearsal of those skills.”

TOUR THE HOLY LAND: Join the next Metro Voice tour to Israel

Therefore, the continual practice of music (and by association, math) is largely responsible for the enhancement of reasoning, motor functionality, computation, auditory discernment, and coordination.

Consider for a moment that historically strong links have been observed between mathematical processing and critical thinking. Some of the greatest critical thinkers in history were also mathematicians: Pythagoras, Plato, Aristotle, Euclid. As students seek new strategies for solving mathematical problems, critical thinking skills are enhanced. Tim van Gelder recommended the following for increasing critical thinking skills: active engagement and transfer of learning, understanding theories, enhancing map skills, learning to identify biases and being open to what should be considered ‘truth.’ By delving further into math reasoning skills, students may achieve a higher level of thinking, critical thinking, and even thinking about thinking (metacognition), which allows students to recognize and implement strategies most beneficial to their unique learning styles, biases, strengths, and weaknesses. This further transcends into life beyond school when individuals must make important life choices regarding careers, postsecondary education, the selection of a spouse, large purchases, and other critical decisions.

The influx of technological advances in our society have afforded students more opportunities than ever to rely on devices to do their thinking for them. As evinced by the studies listed above (and much more literature that is available), this can be incredibly damaging to their long-term critical functions. We do not wish simply to enable students to pass tests. These kids are our future. We must equip them to think for themselves. Merely teaching them what to think is insufficient. They must be taught how to think. So, the next time they reach for that calculator or smartphone to generate an answer, make them pause. Challenge them to reflect. Ask questions that stimulate thoughts about why or how something works. Their futures depend on it.