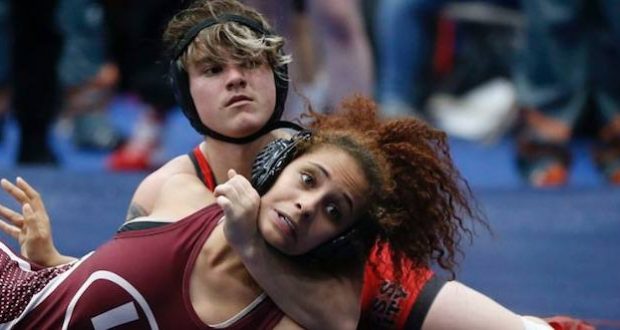 A biological male athlete competes as a transgender woman in a girls wrestling match.

As state legislatures across the country move to protect women’s sports from biological males, Missouri is addressing the issue this year.

But the effort is getting off to a rocky star. A Senate committee on Tuesday removed a proposal that would have protected girl’s sports, from a wide-ranging education bill. Deleted from the legislation was a portion that banned biological boys from joining girl’s teams.

Harrisonville Sen. Rick Brattin, who is sponsoring one of the bills, says the provisions were designed to “protect women in athletics.” His statements echoed recent polls that find overwhelming public support for protecting women’s sports.

Brattin would allow the attorney general’s office to investigate violations and allow the legislature to withhold a portion of a district’s state funding if it is determined it violated the law. Senate Bills 48 and 87, from Sen. Mike Moon of Ash Grove and Sen.-elect Ben Brown of Washington, cut off state funds entirely if districts violate the laws protecting women’s sports.

The legislation comes as a lawsuits progress over a Virginia female athlete who was raped by a biological boy who identified as a female. The assailant was secretly expelled from school by the school board but committed additional sex crimes at a second high school.

Republicans have proposed more than a dozen pieces of legislation addressing transgender youth in Missouri for the 2023 session. They come after several proposals centered on athletics last session failed to make it to the governor’s desk. GOP lawmakers putting forward the bills argue they are spurred by both conversations with constituents and their own personal concerns, citing worries about women’s sports, what’s being taught in classrooms and children’s well-being.

Last session, Republicans in the Missouri House passed multiple bills with the intent of preventing transgender students from playing in K-12 youth sports. The measures died across the building in the Senate, stonewalled by Democrats, but versions have been pre-filed in both chambers ahead of next year’s session.

Several of those bills require student-athletes to participate on the team that matches the biological sex listed on their birth certificate or other government record, barring athletes who were born male but identify as female from playing on girls’ teams. Some of those bills make exceptions for female students to play on boys’ teams if there is no equivalent female competition.

The Missouri State High School Activities Association, which oversees youth sports in Missouri, currently has a policy in place for transgender student-athletes. It requires transgender females receiving medical or hormone treatments to submit an application and consistent documentation to compete on girls’ teams. Students identified as female at birth who identify as male are allowed to compete on boys’ teams and be present in locker rooms.

Legislators have included language in the 2023 proposals that would make districts accountable and subject to lawsuits from girls and parents if laws meant to protect girls are ignored.

Some of the bills vary in how restrictions would be put in place, and others go a step further. Brattin’s bill allows individual districts to hold votes on whether to ban athletes from participating on a sports team that is opposite of their biolocial sex. Senate Bill 165 from Sen.-elect Jill Carter of Joplin also requires schools to section off alternative locker rooms for transgender students, barring them from using the locker room matching their gender identity.

Previous: Democrats want to mint $1 trillion coin to further spending
Next: Bill Maher: Democrats should “answer for” problems in schools