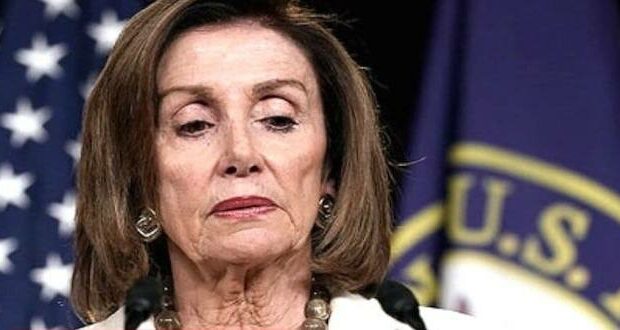 House Speaker Nancy Pelosi is one of the authors of the stimulus bill now under fire from almost half of American states.

Former House Speak Nancy Pelosi has not made a public statement about the exorcism performed at her home.

Many see the exorcism as out of character because while Pelosi calls herself Catholic, she is denied communion and said it is “sinful” to oppose abortion.

Pelosi’s daughter, Alexandra, said the attack on Paul Pelosi affected her mother much more than people realize. “I think that weighed really heavy on her soul,” she said. “I think she felt really guilty,. I think that really broke her. Over Thanksgiving, she had priests coming, trying to have an exorcism of the house and having prayer services.”

Father Arturo Albano of St. Vincent de Paul Church, Pelosi’s local parish, told the “New York Post” that no one from his staff was involved. “As far as I know, no exorcism or priest services were performed at her home,” he said.

When Pelosi was asked if the attack on her husband affected her decision to step down from her role as House speaker, she said it already was time for her to hand over the gavel to someone else. An investigation continues into the strange circumstances surround the supposed Paul Pelosi incident. Pelosi, apparently knew the attacker, telling the police he was a “friend.” A judge on Wedesday said police bodycam footage must be released to the public.

“I was probably going to go anyway,” she said. “If we won by 20 votes and it was a big thing, I might have stayed. It’s true that I had two thoughts in mind when I went to the floor, to stay or not to stay. It was time to move on. If Hillary had won, I could have left. But I was not going to let Donald Trump have his way with the government.”

David DePape, 42, allegedly struck Paul Pelosi with a hammer when police arrived at the San Francisco home in October. The alleged intruder reportedly demanded to know the then-speaker’s whereabouts.

Prosecutors charged DePape with attempted murder, assault with a deadly weapon and elder abuse. However, the accused pleaded not guilty to state and federal charges, including allegations he planned to kidnap Nancy Pelosi. Adam Lipson, DePape’s public defender, said that the suspected attacker “is going to be fighting this case in court, not the hallway.”

San Francisco District Attorney Brooke Jenkins said in a statement following his arraignment that “Mr. DePape will be prosecuted to the fullest extent of the law and held accountable for his heinous crime.”

Previous: Bill Maher: Democrats should “answer for” problems in schools
Next: Here’s the difference between Biden, Pence document discovery