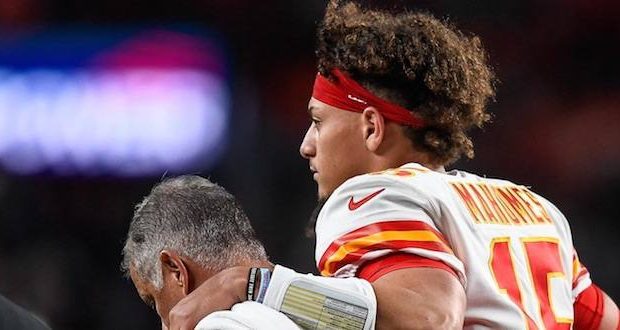 Mahomes being walked off the field. Photo: Screenshot.

Patrick Mahomes: ‘God was watching over me’ during knee injury

Kansas City Chiefs fans held their breath when star quarterback Patrick Mahomes injured his knee in a game on Oct. 17.

Early on the morning after the injury, Mahomes thanked fans and followers on Instagram for their prayers with this message: “Awesome team win! Love my brothers! Thank you for all the prayers! Everything looking good so far! #GodisGood #ChiefsKingdom.”

He later posted, “God was watching over me on that field. My brothers held it down! We keep it moving forward!”

Mahomes, 24, was injured early in the second quarter on a fourth-down quarterback sneak. Last year’s NFL Most Valuable Player was helped off the field by trainers.The Chiefs improved to 5-2, two games ahead of Oakland atop the AFC West division.

If the short-term timetable is correct, Mahomes would miss home games against Green Bay and Minnesota, as well as a November 10 trip to Tennessee, according to Yahoo News.

After that comes a November 18 contest at the Los Angeles Chargers followed by an off week, so if Mahomes needs more time to recover, he could get two weeks while missing only one more game.

Chiefs coach Andy Reid on Monday confirmed his quarterback is progressing with his recovery but said the team won’t rush him back on the field too soon.

Mahomes, is expected to miss up to five weeks with the knee injury but could be back in as early as three. Chiefs head athletic trainer Rick Burkholder confirmed the quarterback’s MRI on Friday “turned out as good as possible” while also noting Mahomes has begun his rehab.