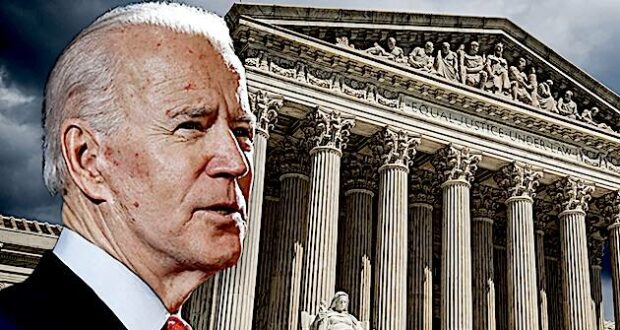 In a rare move, the U.S. Supreme Court is telling the Biden administration to respond to dozens of lawsuits challenging its controversial vaccine mandate for private employers.

Justice Brett Kavanaugh told administration officials to file responses to applications from faith groups, companies, and attorneys general from over half the states in the country by 4 p.m. on Dec. 30.

That’s just days before the mandate’s deadline. Critics say that President Joe Biden has been silent because the White House knows there is no defense for a policy that most say is clearly unconstitutional.

READ: OSHA responds after it loses in court

“This case is finally where it belongs: the Supreme Court. OSHA has threatened to start punishing employers like our clients starting on January 10, and we’re grateful the court has ordered a briefing schedule that will allow for resolution of our petition before that deadline,” Daniel Suhr, managing attorney at the Liberty Justice Center, told The Epoch Times in an email.

“We’re very pleased with Justice Kavanaugh’s quick response and are confident that the court will act quickly to ensure legal predictability before the deadline,” John Bursch, a lawyer for Alliance Defending Freedom, added.

Kavanaugh, a Trump appointment, is dealing with the matter because the appeals court that issued the ruling that prompted the challenges is under his jurisdiction.

The mandate in question was promulgated by the Department of Labor’s Occupational Safety and Health Administration (OSHA). If allowed to take effect next month, it will force every business with 100 or more employees to get proof of a negative COVID-19 test on at least a weekly basis or proof of vaccination from each worker. Companies that don’t comply would face escalating fines. The mandate could cost some businesses millions per year and risk again decreasing the labor market as millions more leave the work force.

The rule could be paused anew by the Supreme Court, which quickly received appeals from the Word of God Fellowship, The Heritage Foundation, Ohio’s attorney general, BST Holdings, and The Southern Baptist Theological Seminary.

Absent a new stay, parties would be irreparably harmed, they argued in the filings.