Home / Health and Wellness / ‘We could have a fine:’ Biden would mandate masks on federal property 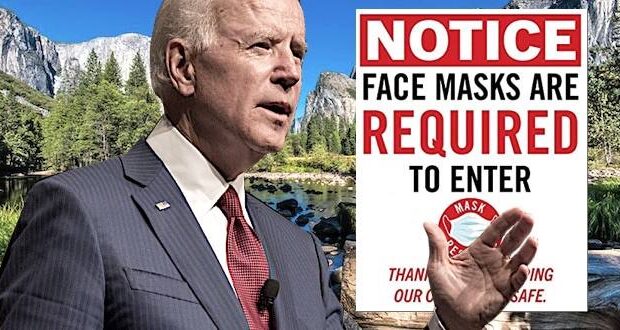 People hiking alone in National Parks would be forced to wear masks under a Biden administration. Democrat Joe Biden, who already flip-flopped from earlier statements, now says he would fine people for non-compliance.

Biden had called for a nationwide mask-wearing mandate in his Democrat National Convention speech but later, after a backlash about the unconstitutionality of such a move, said he would not, adding that a federal mandate would likely be unlawful. He said he would strongly encourage mask-wearing via a federal standard, but that he would leave enforcement to governors.

But on Sept. 17, during a very friendly CNN-hosted town with hand-picked attendees in Pennsylvania, Biden flipped again, saying he believes the president has the authority to enforce such a mandate on federal property and that he would, if successful in his bid for the White House, force people to wear masks in on Federal property which includes outdoor monuments and National Parks.

READ: Federal judge strikes down all state-imposed restrictions in Pennsylvania

“You said about a month ago, for the next three months, all Americans should, you would like to see all Americans wearing masks,” CNN debate moderator Anderson Cooper said. “And that you would push governors to institute mandates for mask-wearing.”

The CDC recommends wearing masks in groups not because the wearer is protected, but to prevent those who may have it from spreading it to others. Guidelines state that wearing a mask while alone is not necessary.

Biden was fact checked, a rarity in the current media climate, by the New York Times for his statement that zero people would have died if Donald Trump were not the president. The Times labeled that statement as false. During the town hall, however, CNN did not fact check in real time.

“Back in the pandemic in 1918, in some states, in some towns, they had actually outdoor courts to fine people who weren’t wearing masks. Is that something you would like to see happen in states?” Cooper asked.

“I would like to see the governors enforce mask-wearing, period,” Biden said. “I can do that on federal property.”

President Donald Trump has said on multiple occasions that people should wear masks but his administration opposes issuing a nationwide mandate.

Previous: ‘Jihad of the womb:’ Christian women kidnapped in Egypt
Next: The Covid-19 timeline explained