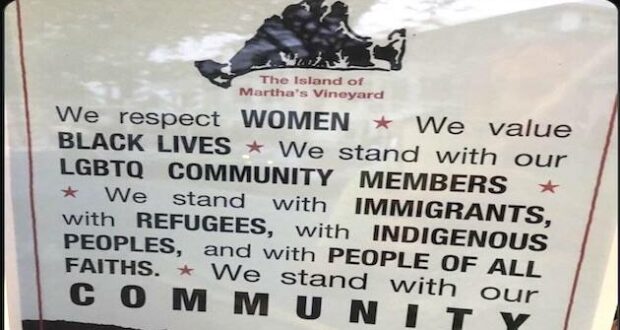 Social media users are mocking signs like this, put up previously by residents of Martha's Vineyard, after it deported 51 illegal aliens dropped off there by Gov. Ron DeSantis.

Residents of so-called sanctuary cities were not happy when illegal aliens actually showed up in recent weeks. However, a majority of likely U.S. voters believe these cities should have to share the border states’ burden of dealing with an influx of illegal immigrants, according to a new CRC Research poll.

The poll comes after Martha’s Vineyard, home to Barack Obama and leading liberals, called in the national guard after just one day to remove illegals flown there by Gov. Ron DeSantis. The island is being mocked for the action in light of signs posted by its residents that says they respect immigrants and refugees.

The poll asked: “In order to manage the influx of illegal immigrants crossing the border, the state of Texas has sent buses of immigrants to other states and sanctuary cities including Chicago, New York City, and Washington DC. Do you agree or disagree that sanctuary cities should have to share the burden of dealing with these illegals and not just the border states?”

A slight majority of Democrats agreed (51 percent), as did 78 percent of Republicans and 63 percent of independents. Eighty-one percent of conservatives, 58 percent of moderates and 49 percent of liberals agreed as well.

“A majority of moderates, grassroots conservatives and even a plurality of liberals agree that pro-sanctuary city mayors should put their money where their mouths are to take care of the same people they’ve encouraged to illegally come here,” she said. “Border towns shouldn’t be the only ones who bear the burden of caring for the major influx of illegal immigration fueled by rhetoric from pro-sanctuary city politicians like Joe Biden, Eric Adams and Muriel Bowser.”

The new poll comes as California Gov. Gavin Newsom asked the Department of Justice to look into states that are allegedly “kidnapping” illegal immigrants and flying them to other states. Texas Gov. Greg Abbott has sent thousands of migrants to Chicago, New York City and Washington, D.C., as part of his “Operation Lone Star” policy. Florida governor Ron DeSantis sent 50 migrants from Texas to Martha’s Vineyard in Massachusetts last week.

Immigrants deported from Martha’s Vineyard say they chose to go there when given the chance by Florida.

Previous: $1 now worth just 88 cents while Biden claims inflation has risen “hardly at all”
Next: Extraordinary new documentary on Mother Teresa in theaters Oct. 3