Provoked by a number of outrages across the country, parents have begun pushing back on politicians, school boards, and educators who use children as guinea pigs in radical social experiments and left-wing indoctrination schemes.

Perhaps the most notorious case has been the young Virginia girl raped in a girls restroom by a boy wearing a skirt. Despite being aware of the situation, the Loudon County School Board, which had promoted transgendered bathrooms, did nothing. When the girl’s father complained at a school board meeting he was subdued by police, arrested and charged with disorderly conduct. The boy however was quietly transferred to another school where he attacked yet another young girl. Internal emails show that the school board knew of the rape yet the president lied about it.

The case and the furor over radical instructional components became a turning point in the state’s gubernatorial contest when Terry McAuliffe, the state’s former governor and current Democrat candidate declared “I’m not going to let parents come into schools and actually take books out and make their own decision. I don’t think parents should be telling schools what they should teach.” He lost.

Across the country, the introduction of Critical Race Theory (CRT), Diversity, Equity and Inclusion (DEI), and other variations on radical themes which belittle and demean both the country’s history and white children is creating an uproar. Added to those concerns are policies over mask mandates and vaccination protocols. The resulting cocktail of concerns is boiling over into school board meetings across the country.

Instead of addressing these concerns, the National School Board Association wrote a letter to the Biden administration comparing parents to domestic terrorists and Attorney General Merrick Garland responded five days later with a memo designed to intimidate parents.

The Kansas City area is not immune to the controversy. Early in October parents concerned about mask mandates, CRT, and inappropriate reading materials in the school libraries were removed from a Turner School Board meeting and arrested when they refuse to wear masks to the meeting. While this was ignored by the local media, the group has since created a “free speech” page on social media and attempted unsuccessfully to write-in candidates for the USD 202 School Board.

In Olathe, State representative Adam Thomas exposed a “Gender Unicorn” handout that sought to explore students’ gender identities. While the school district quickly disavowed the handout there is no indication any disciplinary action was taken against either the teacher who distributed the questionnaire or their principal who approved it. 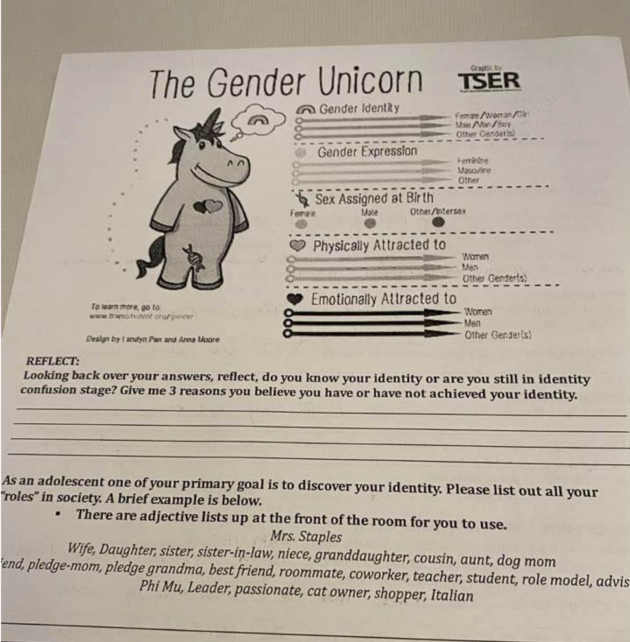 CRT and DEI are intrinsically anti-capitalist, pro-socialist theories and overtly demeaning to the country’s history.

Equality of opportunity is a desirable goal. This was indeed the motivation behind Dr. Martin Luther King Jr.’s goal that everyone should be judged by the content of their character and not the color of their skin. The emphasis is on the meritorious achievement of the individual and not their group identity. It is highly desirable in a democratic society to allow the best to rise to the top thereby enhancing creativity and productivity.

Equality of outcome is intrinsically a socialist concept. The keyword here is equity. According to a recent article in The Kansas City Star “Experts say equity recognizes that each person has different circumstances and privileges, due to economic status, race, gender and other factors, and means that the appropriate resources and opportunities are allocated to reach an equal outcome.” (stress added) The motivating factors here are class, race, and gender, in essence, one’s intersectionality score.

Equity-based theories are the reason many students and young people no longer understand the evils inherent in collectivist theories and yet, according to The Star, the support or opposition to this indoctrination is the dividing line between the factions.

Aside from the recent controversy in the Turner school district the controversies have had little impact in Wyandotte County. Neither Piper nor Kansas City, Kansas have indicated any problems. In Bonner, where an invigorated Republican Party ran Matthew Birzer and William Barajas, Jr., both candidates trailed the pack. However, Barajas attributed their defeat to residents’ familiarity and satisfaction with the current board, not ideology.

Johnson County is a different story. The northern east part of the county has become heavily Democrat with cities like Prairie Village and Mission becoming almost as ‘woke” as areas like Portland and San Francisco while farther east, Shawnee Mission seems to be bi-polar, electing a far-left school board while installing a predominately conservative city government.

In the two areas most affected by the controversies, conservatives backed by the 1776 Project PAC appear to be dominating both Olathe and Blue Valley. Originally, in Olathe it appeared that conservatives had defeated the leftists with a clean sweep. However one race is too close to call and at last count, the leftist had inched ahead with last-minute mail-in ballots.

In Blue Valley, one conservative had dropped out and hence the initial count was two to one in favor of conservatives but there, also, a razor-thin margin of victory by Jim McMullen over Lindsay Weiss, a classic opportunity/equity battle, was also questionable.

Whether or not the movement to remove radical left-wing social experiments from the schools will gain any traction is not clear at this point. What is clear is that if it fails, the country and our local communities will be radically transformed by the next generation currently being indoctrinated.

Previous: Parking meters active again on downtown Topeka side streets
Next: It’s beginning to sound a lot like Christmas with 10 new albums releasing