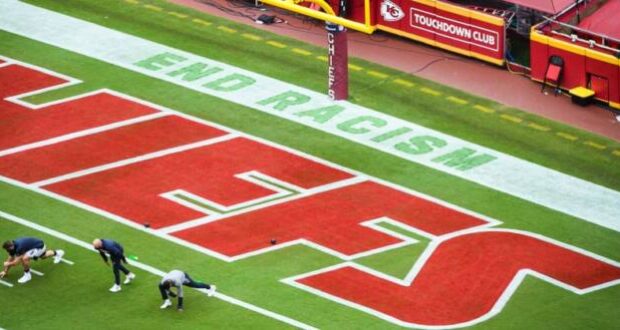 Television ratings tanked for the opening game of the NFL season between the Kansas City Chiefs and Houston Texans last week. Many people, both in and out of media and sports, attribute the decline to the increasing politicization of the league by owners.

The game attracted 16.4 million viewers, which was a 16 percent drop in comparison with the kickoff to the 2019 season, according to “The Washington Examiner.” The figure marks a 10-year low for both NBC and NFL.

The Chiefs, which as an organization has taken steps to eliminate what it considers culturally sensitive fan traditions this summer, adorned their field with “End Racism” logos in each end zone. While everyone can seemingly agree with that motto, it is the the increasingly politically correct atmosphere and disrespect by many players that sports fans disagree with.

Players for the Houston Texans refused to take the field during the playing of the national anthem, and a second anthem, the “black national anthem,” was played as players for the Chiefs stood proudly. Video circulated on Twitter Friday morning of socially distanced fans booing as the Texans took the field, not as media has reported, players stood linked arm-to-arm during a pregame “moment of unity.”

The NFL pledged to raise awareness for social justice issues this season, committing $250 million over a 10-year period toward combating systemic racism. President Trump has argued that the NFL and other sports leagues will lose viewers if they allow national anthem protests and other demonstrations to proceed.

After banning protests in support of police, the league did allow players to adorn their helmets with the names of police officers killed by looters or individuals involved in the Black LIves Matter protests.

The NFL has stepped squarely into the social justice space, with messaging blanketing most of the opening minutes of the telecast and halftime show. Slogans are in place in the back of both end zones, players linked hands in a “show of unity” and commentators made multiple references to social justice efforts. Critics of the league have claimed that they will stop watching as long as politics intrude on sports.

READ: What does BLM really believe?

Players chose to showcase other messages during their pregame workouts. “It Takes All of Us” and “BLM” were among the phrases spotted on the field. Players who opted to wear the decal were given a list of names or they could choose a “victim of systematic racism who is not on that list,” NFL executive Anna Isaacson told teams in July, according to the NFL Network.

“As we continue to amplify and elevate the NFL’s ongoing and long-term commitment to social justice, we will be incorporating several prominent elements on the field, into all broadcasts and across league and club platforms to begin the NFL season and beyond,” the memo read, reported Fox News. “In developing these concepts, we have worked directly with players and received input from the NFLPA,” the memo added.

President Donald Trump has been critical of the heightened role of politics in sports and his comments mirror growing frustration with the American public.

“Football is officially dead — so much for ‘America’s sport.’ Goodbye NFL . . . I’m gone,” Eric Trump, the president’s son, recently Tweeted, responding to a report that a Dallas Cowboys player said the team’s ownership had given the “green light” to protests.

A poll released last week found professional sports at its lowest level of support by the public. It is even seen unfavorably by both white and African Americans.

Previous: ‘We Back Blue’ march in Kansas City shows support for law enforcement
Next: Federal Court strikes down all Pennsylvania state covid restrictions